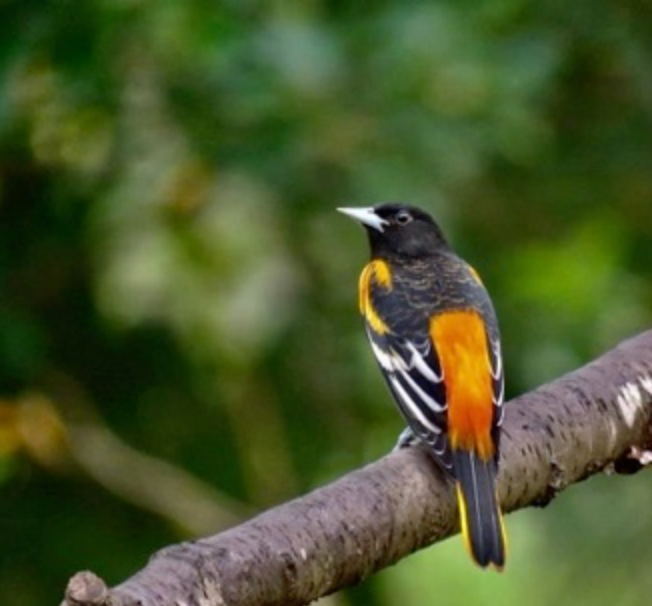 COLUMBIA, S.C. (FEB. 9, 2021)  — The South Carolina Department of Natural Resources (SCDNR) will conduct an annual Baltimore Oriole Winter Survey Feb. 12-15, in conjunction with the Great Backyard Bird Count. The state natural resources agency is interested in the status and distribution of these colorful songbirds that are wintering in the Palmetto State.

Survey participants count and record the largest number of Baltimore orioles they can see at one time, on one, two, three or all four days of the survey period. Even if you cannot participate during the count period, SCDNR would still like to record your oriole numbers during the winter. You can participate in the survey by requesting an SCDNR survey form, or if you are a Great Backyard Bird Count participant, you can report your numbers through an eBird submission.

This will be the sixth annual survey, and South Carolina continues to report the largest number of wintering Baltimore orioles in the country. Usually, these birds would winter in southern Florida, the Caribbean, Central and South America. However, during the last several decades, they have been wintering along the East Coast and Southeast in greater abundance. Last year’s Great Backyard Bird Count results had sightings ranging along the East Coast from New Hampshire to Florida, and across the Gulf Coast states to Texas. There was even a report of one in Newfoundland! The bulk of the birds reported were from Virginia to Florida.

The majority of South Carolina’s orioles winter along the coastal plain from Myrtle Beach to Hilton Head Island. The hot spot is the Charleston, Berkeley, and Dorchester counties area, where 67 percent of the state’s orioles were tallied. Some good numbers extend inland to Lexington County, and the Upstate continues to report a few. It will be interesting to see if this becomes a trend. A first for the survey were reports from Anderson and Greenwood counties.

Though SCDNR is not sure why these birds have begun overwintering in the state, they respond well to the popularity of backyard bird feeding. Orioles are best attracted to feeders where the homeowner is already feeding birds in general. Orioles are attracted to the activity of other birds at feeders. If conditions are right for them, they are likely to frequent the feeders where they can find food, water, and shelter. They will eat a variety of foods and seeds—suet and suet products, some seed mixes, nuts and fruit—but their favorite food by far is grape jelly. Since these birds have become more common, you can find an assortment of feeders that cater to them and their foods, especially at bird-feeding specialty stores.

The survey will enable scientists to learn the distribution and abundance of Baltimore orioles wintering in South Carolina. Information from the survey and Great Backyard Bird Count can provide a “big picture” about what is happening to Baltimore oriole populations and other bird species. SCDNR appreciates the public’s support and efforts in helping collect the valuable information in this survey.