Moving through my Monday chores 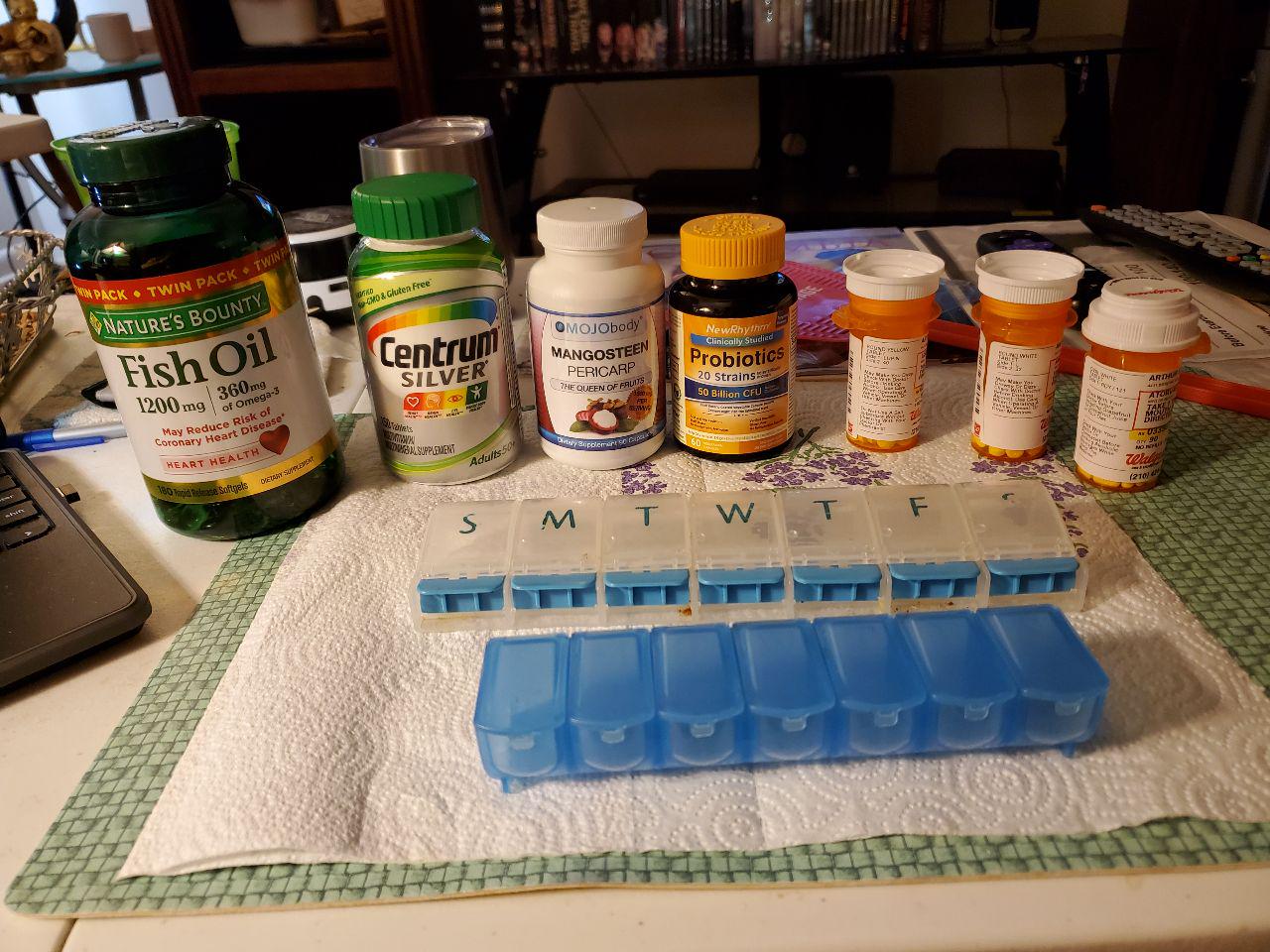 They say that holding to a regular schedule is important if one wants to have a successful retirement, and if one wants to maintain good mental health during the pandemic lockdown. Fortunately for me, scheduling and prioritizing my chores and activities has been a time management habit of mine for decades.

Mondays now always include at least two particular chores: 1.) doing my laundry, (two loads are moving through the machines now and there will be a third); and 2.) filling my morning and evening pill boxes with the medicines, vitamins, and food supplements I take daily. Pill boxes and bottles pertaining to that 2nd chore are pictured above.

And so it goes.

Where the heck did THIS day come from!?

Saturdays under the current “plandemic” lockdown are supposed to be particularly quiet and calm in the Roscoe-verse. They are days when I don't have to set my alarm. (During her work week I wake first to fix her breakfast and make sure she gets her day started on time.) So Saturdays I can sleep as long as I like.

Waking at my leisure there is usually some kind of live Saturday sporting event on TV in the afternoon now. Thank you NASCAR for coming back to life! And then my Svengoolie in the evening.

As I was fixing this morning's coffee, she came into the kitchen and said,“Honey, I need your help with my phone.” She has an iPhone and I'm exclusively an Android guy. It turned out to be a problem that we needed her Apple I.D and password to remedy, and she had no idea what they are. She had somehow removed her Facebook app and couldn't retrieve it. But I WAS able to logon to her Facebook using my backup Android phone, so I'm letting her use it now. Not wanting to be left in any kind of lurch without a spare, I then ordered myself another phone. Darn, I was NOT planning to spend any money today!

After I'd sorted all that out, I got a text from the neighbor lady next door. She said she needed help and gave me instructions about feeding her cats. WTF?! So I went next door to see what was going on. Before she could unlock the door, a fire truck pulled to the curb and the EMTs rushed up. I stepped back and waited in her yard as the guys got to work.

Turns out she was more than a little drunk. She'd twisted her ankle, sprained it, and had fallen. The guys helped her out to a chair on her front porch, took her vital signs, and tried to figure out what was going on. One of them came to me and asked, “Is she always this argumentative?” I replied that, yes, she pretty much always was. She was insisting that she'd broken her leg, and they were saying that, no, it didn't look like any bones were broken. She demanded to be taken to the hospital, so an ambulance was called and off she went. On her way across the yard she gave me her keys and asked me to take care of her cats.

My wife was napping throughout this drama. When she woke I told her what had happened I said that she'd probably be back home from the hospital after sobering up with her sprained ankle wrapped. Sure enough, later in the afternoon there was a knock at my door. Someone had given her a ride home and was asking for her keys. Sheesh!

That's enough excitement for me. Svengoolie comes on in a few minutes and I plan to enjoy the show in peace and quiet.

We all know that Isaac Newton was one of the most brilliant scientists of all time, right? A manuscript of his is now being offered at auction which includes his hand-written notes on cures for the plague then sweeping Europe. As reported at the Muse & Reason blog, Newton's thoughts on a promising cure (?) are pretty awesome:

“The best is a toad suspended by the legs in a chimney for three days, which at last vomited up earth with various insects in it, on to a dish of yellow wax, and shortly after died... Combining powdered toad with the excretions and serum made into lozenges and worn about the affected area, drove away the contagion and drew out the poison.”

I do NOT think I'll be trying the dangling toad remedy myself.

Here for the long haul. 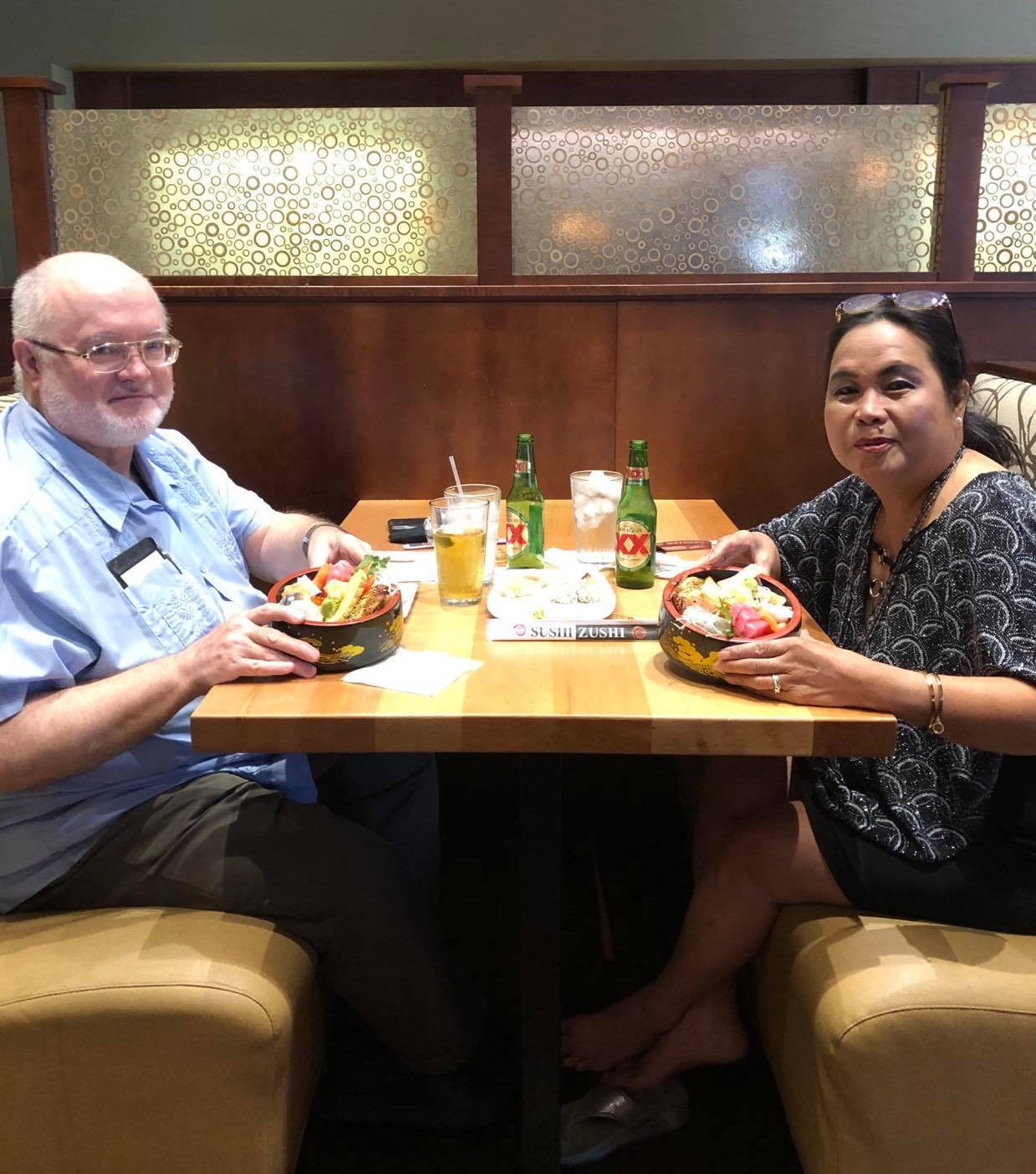 Her picture, posted above, of our Anniversary Date Dinner last week is much better than mine. She passed her camera to one of our servers and asked him to snap the photo of us holding our Chirashi Bowls. For my picture, posted here a few days ago, I just snapped a quick shot of the food in front of us from my seat in our booth. To do justice to the event it's only right that I put up her picture.

The title of this post also applies to my commitment to this particular blogging platform, which happens to be the most pleasant that I've used in my over twenty years of blogging. Today I upgraded to the 5-year Pro plan at Write.as. And as we all know, five years in Internet-time almost qualifies as an eternity.

So in both my personal life and my online life I've settled into relationships so satisfying that I intend to continue them for the long haul. I like that.

Kev Quirk, he who originated the 100 Days To Offload blogging challenge in which many of us are participating, had a think about that today and adjusted the guidelines defining our 100 Days challenge.

Some people appear to be having no issues with the #100DaysToOffload challenge in its original form. If you want to continue doing 100 posts in 100 days, go for it! The challenge is now to publish 100 posts in 365 days, but if you can do it in 100 days, more power to you. If you do it 150 days, 200 days or 300 days; it doesn’t matter. What’s important here is to motivate people to write more. That’s all.

I'm happy to embrace this change. As my online life adjusts to the long term worldwide economic slowdown/shutdown I find myself using new and different social platforms and “socializing” with different communities that have different interests and concerns.

Writing a little less frequently here will give me more time to better collect my thoughts and maybe to write a little better. At least, that's the hope. We'll see if that happens.

Rather than obsessing about publishing something, anything, every single day, I'll now expand the time frame of my 100 Offload posts from 100 Days to one year – 365 Days.

I’m publishing this as day 18 of my 100 Days To Offload. You can join in this blogging challenge yourself by visiting https://100daystooffload.com.

I was pleasantly surprised and more than a little nervous when Sylvia suggested we take a walk through the neighborhood yesterday evening. We have both been concerned about weight gain during this lockdown and Lord knows we could use some healthy exercise. So we donned our mandated masks and set out walking.

The plan originally was simply to walk around the block. (We have big blocks in our neighborhood.) After the first 50 feet or so she suggested, “This is nice. You know, if we were to walk two blocks over then double back, that would be even better.”

At the far end of the second block she had a good stride going and my hips were starting to ache. We turned right at that corner and, by the time we reached the next corner and turned again to head in the direction of our house, she was still strolling happily while my leg pain was increasing.

We finally got back home and she happily remarked at how much she was sweating. I mostly groaned. All I wanted to do was change clothes and sit still. Sit. Very. Still.

After relaxing for awhile, we decided that we'd had a good experience and we should make our evening walk a daily thing. So as I move through today's regular chores I know I have another walk to look forward to this evening.

I am participating in a blogging challenge called #100DaysToOffload. This is my day 3/100. Check out https://100daystooffload.com for more info.