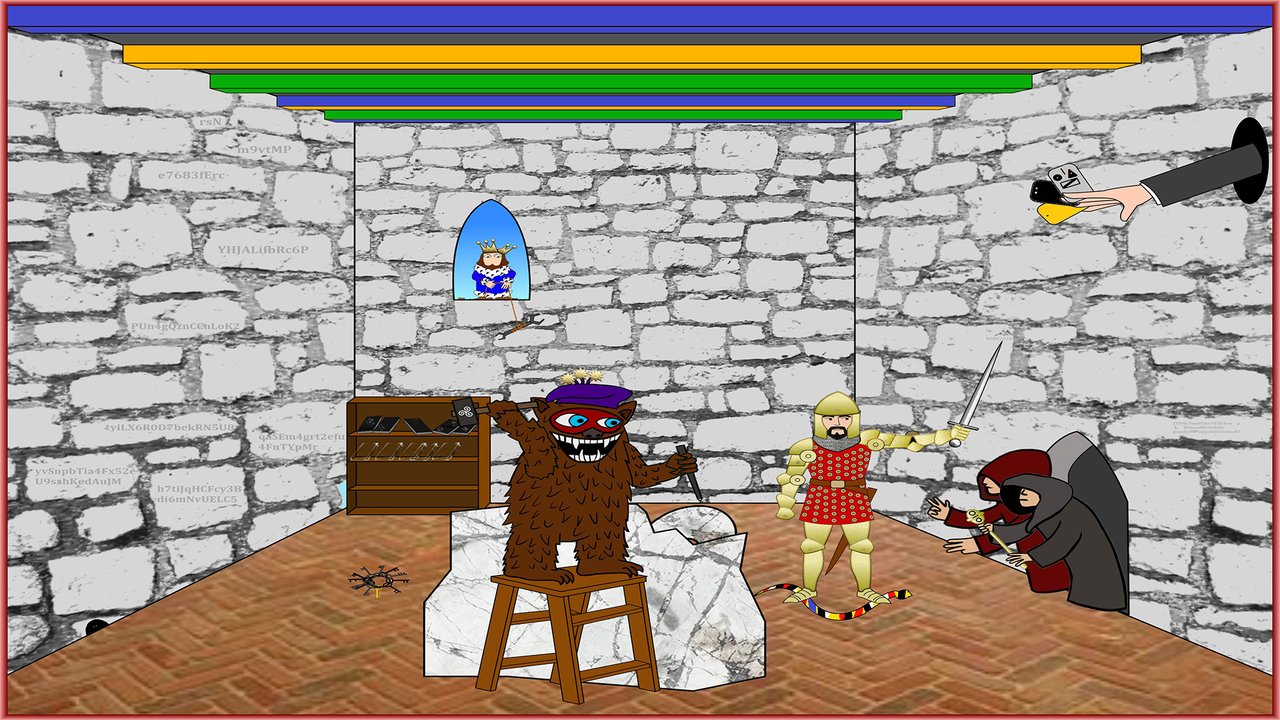 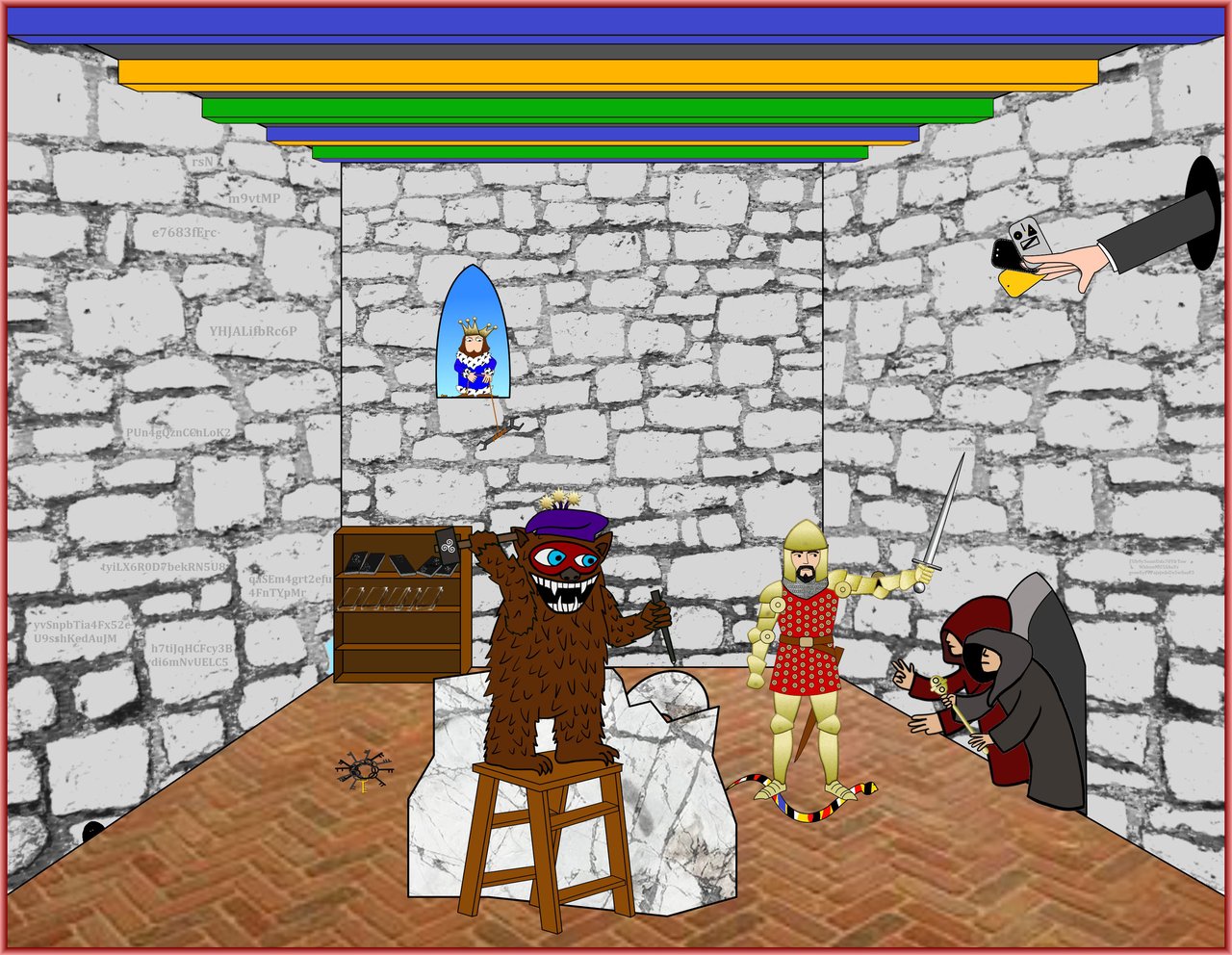 Guys, I think I got this one figured to some degree. English is not my native language, so bear with me..

This is a hint at what might be coming next. And some of those things have been speculated in the xrp community for some time now. We need to go back a bit in time to understand. Remember one of the former riddles when the guy in armor was standing outside of the castle. The guy in the armorsuit is representing Brad Garlinghouse, the castle represents the world economy or let`s rather say the the global financial system. 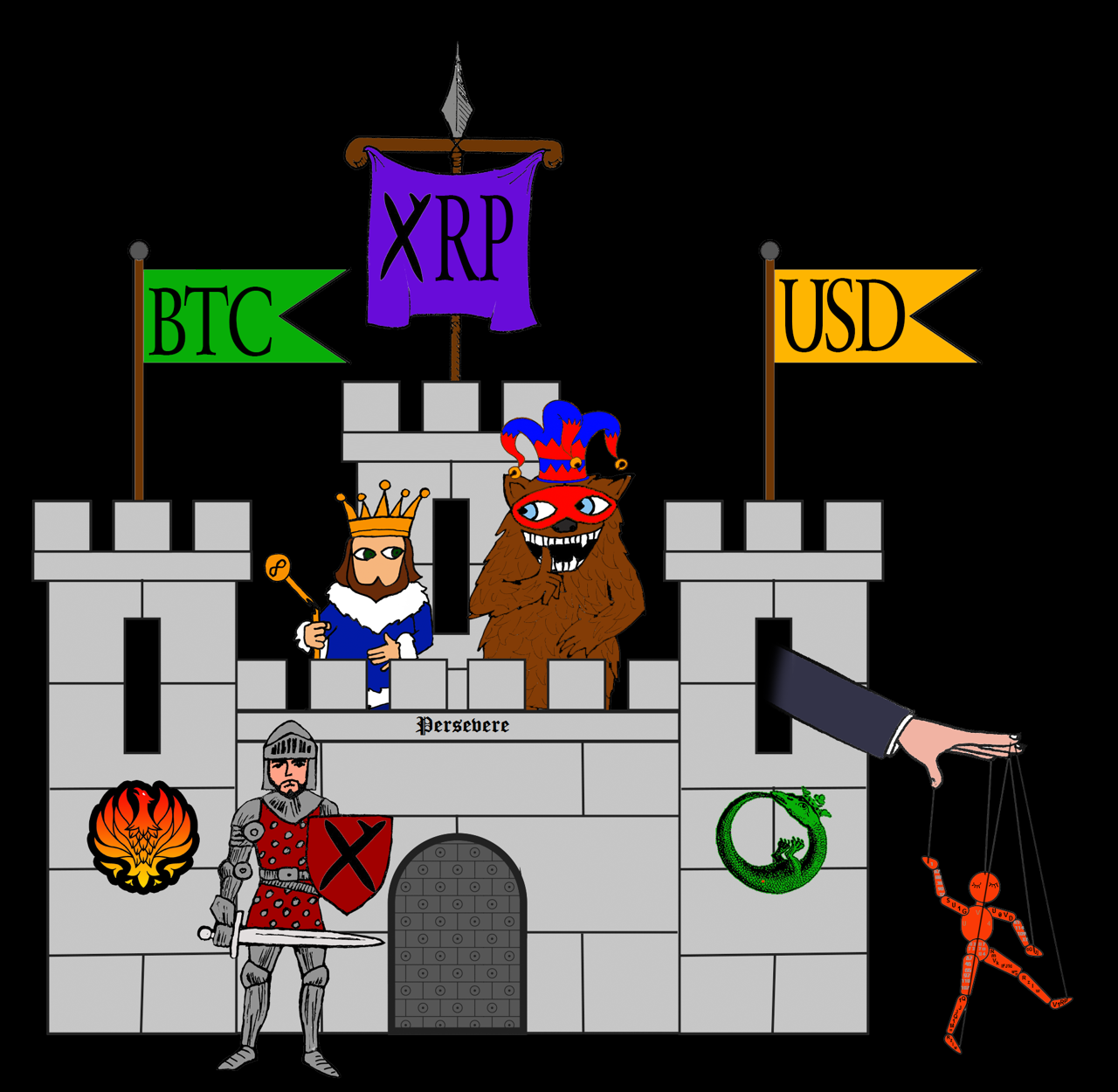 We`re now inside the heart of the castle, the place where everything is decided behind the scenes. Brad now has a golden armor. Not only that is a reference to gold but also the round little circles are the alchemical symbol for gold. It`s a clear hint, that a goldstandard is coming. Remember Judy Shelton talking about a new Bretton Woods and how it could come about in a very cryptocurrency way. These people know the schedule... they`re very cautious about how they word everything and give tiny tidbits, that most people cannot piece together. It is rather for them to communicate for those in the know of the banking sector. Look at Brad`s armor again. There is another hint at Bretton Woods, since the colour of his breastplate, where all the goldsymbols are, resembles excactly the colour of the rooftop of the Mount Washington Hotel at Bretton Woods. 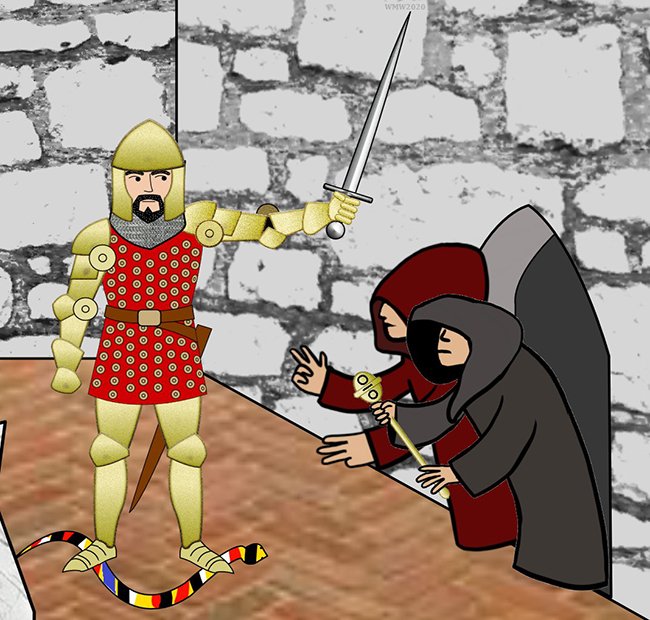 Brad is urging the two priests, that represent the hidden rulers in the banking system to hand over the golden scepter, which gives him the ability to rule it all. The two priests, or mystics, one of them is making hand signs. 3 finger at each hand, which represents 33, mason symbology, which shows, who really rules behind the scenes. Maybe they aare reluctant, but this could also be just for show. I can`t remember where I know this OIO symbology which is depicted on the scepter. I think from something electricity related, kind of an electric circuit, which could in thise case represent the digital asset space, or rather the upcoming internet of value.

Bearableguy is carving something out of this rock. That is an allegory for carving something in stone, so it gets irrevocable without a doubt. What he carves has the shape of a shield. Notice how Brad doesn`t wear his old shield with the X (XRP) on it? This is just in the making and when the SEC lawsuit is finished, the shield will be finished. Or maybe even before that. In the center of the shield something can be seen of a brown colour. It might be something out of wood, as it has the same colour as the leddar. Maybe a reference to Bretton Woods, but this could be a stretch. There might be hints in previous riddles, objects with the same colour. Or just something that will only be revealed in the next puzzle. 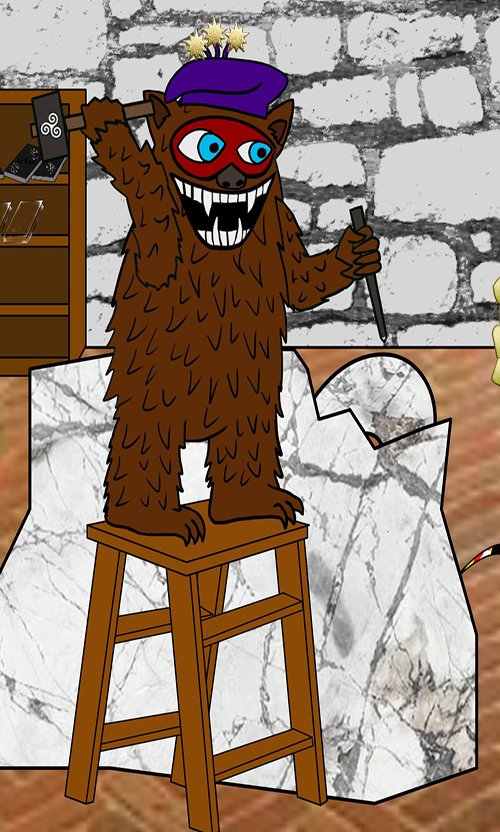 Remember in the former puzzle with the “regulation molasses” can. It`s slow as molasses.. so this may be why it`s going down this road now. This is not the only reason, I think those might only be apparent reasons for the public, which don`t know how the game is played. The SEC will only act accordingly to the big banks, so behind the curtain this is already a done deal. The question is how it will be delivered. So maybe this lawsuit is another play in the game to make the public not suspect regulators or banks work in favour for this digital asset. They make it appear a competition. When KIK Messenger got sued over their native token in the end it came out as a non-security. As the only one besides BTC and ETH. 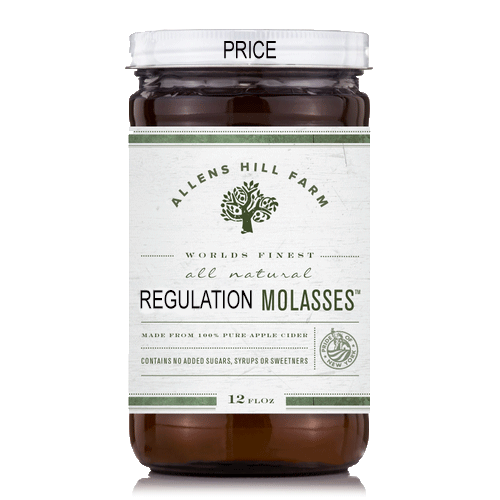 The beams on the top match the colours of the flags from the former puzzles. Green = BTC. Yellow = USD and Purple = XRP. The beams in the back are of mixed colours refering to as when it was a battle between these assets. In the end XRP comes out at the top as the predominant with USD and BTC behind it.

On the right above those priests we have the hidden hand of the central bankers offering 3 wild cards, which would hint of how the scenario will play out. There are three cards, each one with 1, 2 and 3 points, which could hint at the sequence of proceedings. 1. goldstandard 2. blackout and 3. collapse of the old system. I think the 3rd card could mean this, because the logo reminds of the Deutsche Bank logo, which could be the first domino of it this collapse. 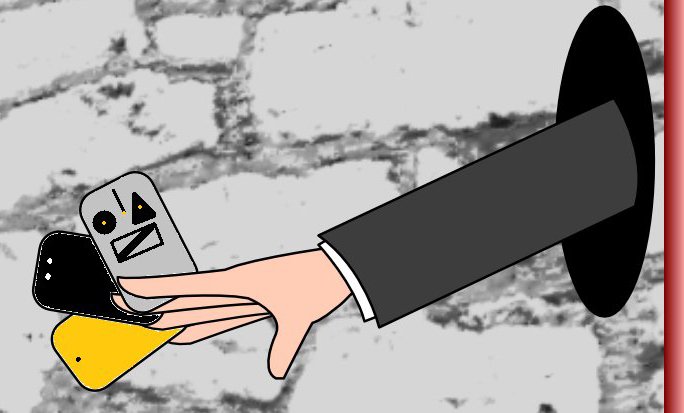 In the back we see the old king of the system with his wrecked crown, which is parted into 2 and 3 jags, which could hint at Jay Clayton, who quit on dec. 23rd. In a last attempt (which could just e part of the show) he throws a wrench, while he is almost out of the window. Which is followed by a big shakeout on the market. I think it`s not so much about the shakeout, but rather pave the way for the exchanges to proceed with certain steps. Some are delisting XRP other halt the trading. I think this was what was meant to happen for the “flip the switch” moment. 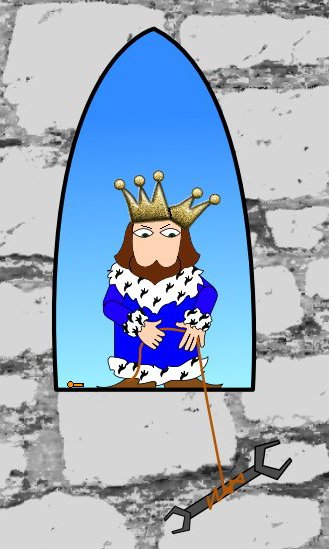 On the left side we have the little peekhole with the mouse. Small investors, the general public, who can only get a peek of what is going on there. Notice how we look from behind bearable guy and there is this huge rock in front of their eyes, which hides what Brad is doing on the other side for them. The wall is full of numbers. These seem to be wallet adresses, which would be whales that we need to look out for to make some moves more comprehensible in all of this. 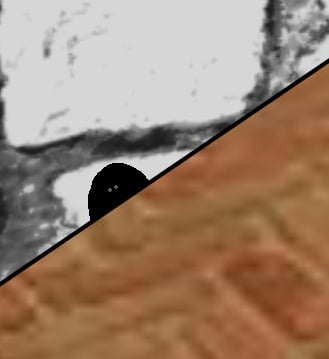 Don`t you think it`s strange, this comes out a few hours after all of this happened. This is well thoughtout. And it shows what is going on in cryptic terms. What better way would there be, if you want to get this info out for some reason. The general public would never take any of this seriously, so this knowledge only rests with those in the know. Masons have a credo to put it all in front of our faces in one way or another, in codes. So this is not surprising. 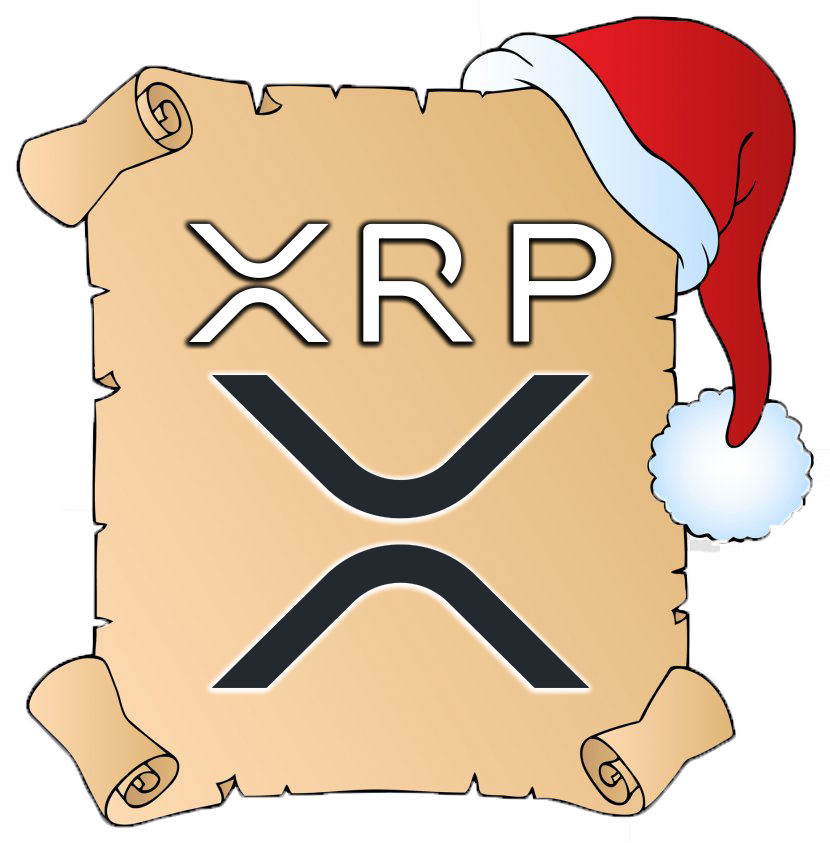