RFC-225 is titled “RAND/UCSB Network Graphics Experiment”. It's authored by Eric Harslem of Rand and Ron Stoughton of UCSB. It's dated September 13, 1971.

For about a month now, programmers at RAND Corporation have been accessing UCSB's On-Line System (OLS) via graphical consoles at the RAND offices.

Specifically, the OLS is being accessed via the Rand Video-Graphics System (VGS), which is equipped with a tablet input. It runs a special program locally that acts as a kind of virtual OLS interface that emulates the second keyboard needed to use the OLS. If you look at the ASCII art diagram you'll see it's divided into three parts:

(By the way, the figures in the original document are almost certainly not ASCII art. Most of the drawings in the early RFC series were converted to ASCII from their original form as line drawings in the late 1990s. If/when I can dig up the scans, I'll add them here.)

They plan to present the result of this work at the October graphics meeting in the form of both a paper and a film showing its use.

We haven't heard from Ron Stoughton since the very earliest days of the Network Working Group! He was one of the original members and his name is listed in RFC-3 as the primary contact for UCSB. This is the first RFC he is listed as an author on, and he will only write one more after this.

The Rand Video-Graphics System is described in detail in this 1971 paper.

Here is a poor-quality photo of the system in action, from the paper: 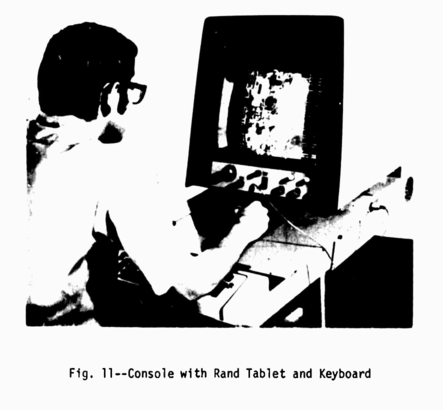 And here's a block diagram of the system, also from the paper: 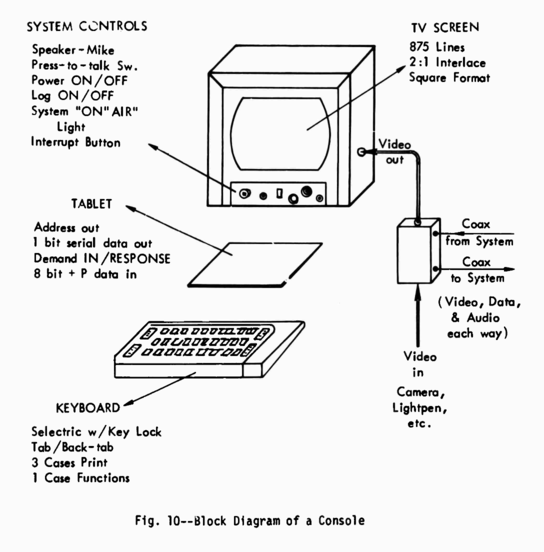 There are more photos available in this less detailed but higher scan quality paper at the RAND website.