RFC-29 is a response to RFC-28, which asked for comments related to installing a real-time clock on the SRI network. This is from BBN's Bob Kahn, who would go on to co-invent TCP/IP. It's dated January 19th, 1970, six days after Bill English's request.

This note is in response to Bill English's Request for Comments: 28.

A “millisecond” clock should be satisfactory for most network measurements. Round-trip message transit times typically should be at least on the order of tens to hundreds of milliseconds. The IMP contains a 16-bit hardware clock which is incremented every 100 microseconds to allow for timing of internal events within the IMP, as for example, during tracing. However, most measurements are made using a 25.6 ms. software clock.

But here Bob is saying that since most messages are going to take at least tens of milliseconds, a clock doesn't need to be more accurate than that if you're just trying to measure the round trip message time.

Anyway this is a pretty cut-and-dry answer to a pretty open-ended question.

When Kahn mentions the 100 microsecond clock on the IMP, that's due to the hardware that the IMP was running on: the Honeywell DDP-516. Here's a sales brochure for that model, featuring this amazing image: 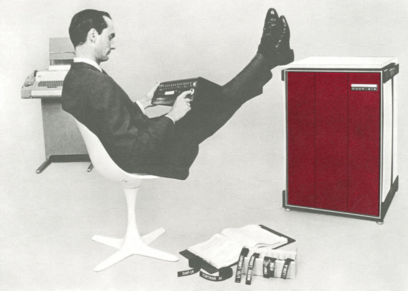 Adrian Wise has written an emulator for the DDP-516, and his site has a bunch of its history and its software that can be run in the emulator! The programming section has what seems to me everything you need to learn to write your own programs for the computer (or at least the emulator).