Separating the good from the bad and the ugly...

...separating the commons from capitalism but including a bridge.

This is the second example in a series of techniques for depicting economic networks, very different from the first one.

Simple and schematic, contrasting the Commons from Alienated Production: 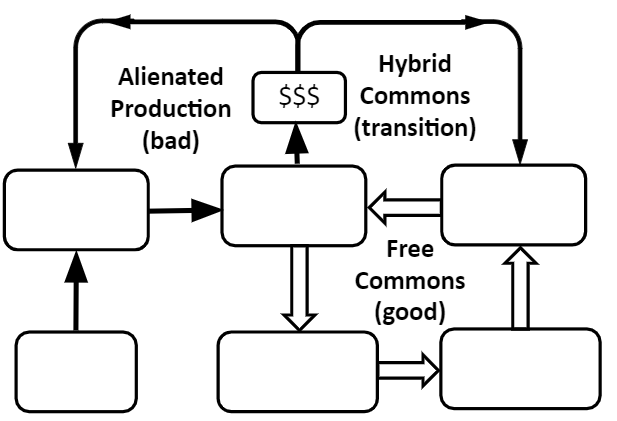 “Alienated production” in that diagram means situations where the value generators (the people who do the work) do not control their own conditions of production, that is, they are working for somebody else, who controls their working actions and conditions and takes all the products they created and all the profits from selling them.

The diagram comes from Ron Eglash, who explains it in detail in his own blog, about Generative Justice.

Eglash contrasts generative justice from distributive justice, where money goes to the government and then is distributed to the populace to somewhat make up for injustices in the economic system. The principle of generative justice is “the bottom-up circulation of unalienated value”, controlled by the communities where the value was created. Done well, the injustices do not happen in the first place, to be (partly) compensated later.

Here are a couple of Eglash's examples, related to a couple of the networks described in previous posts.

The first example is related to the post about Distributed manufacturing of open hardware.

Eglash introduces this example: This particular chart is for the case of Arduino, an open-source, microprocessor-equipped prototyping platform that has inspired a wide range of “maker” or “DIY” innovations created in an artisanal, unalienated mode of production. In contrast to the idea of patents or copyright, open source generally allows anyone with the right to distribute, modify and make use of the intellectual property. In the case of Arduino it means I can download a blueprint of the circuit, make whatever changes I like, manufacture my version and sell it. And the code these circuits run is also open source, and thus similarly shared by peers, both lay and professional. Code is shared through a “public commons,” hence the phrase “commons-based peer production” 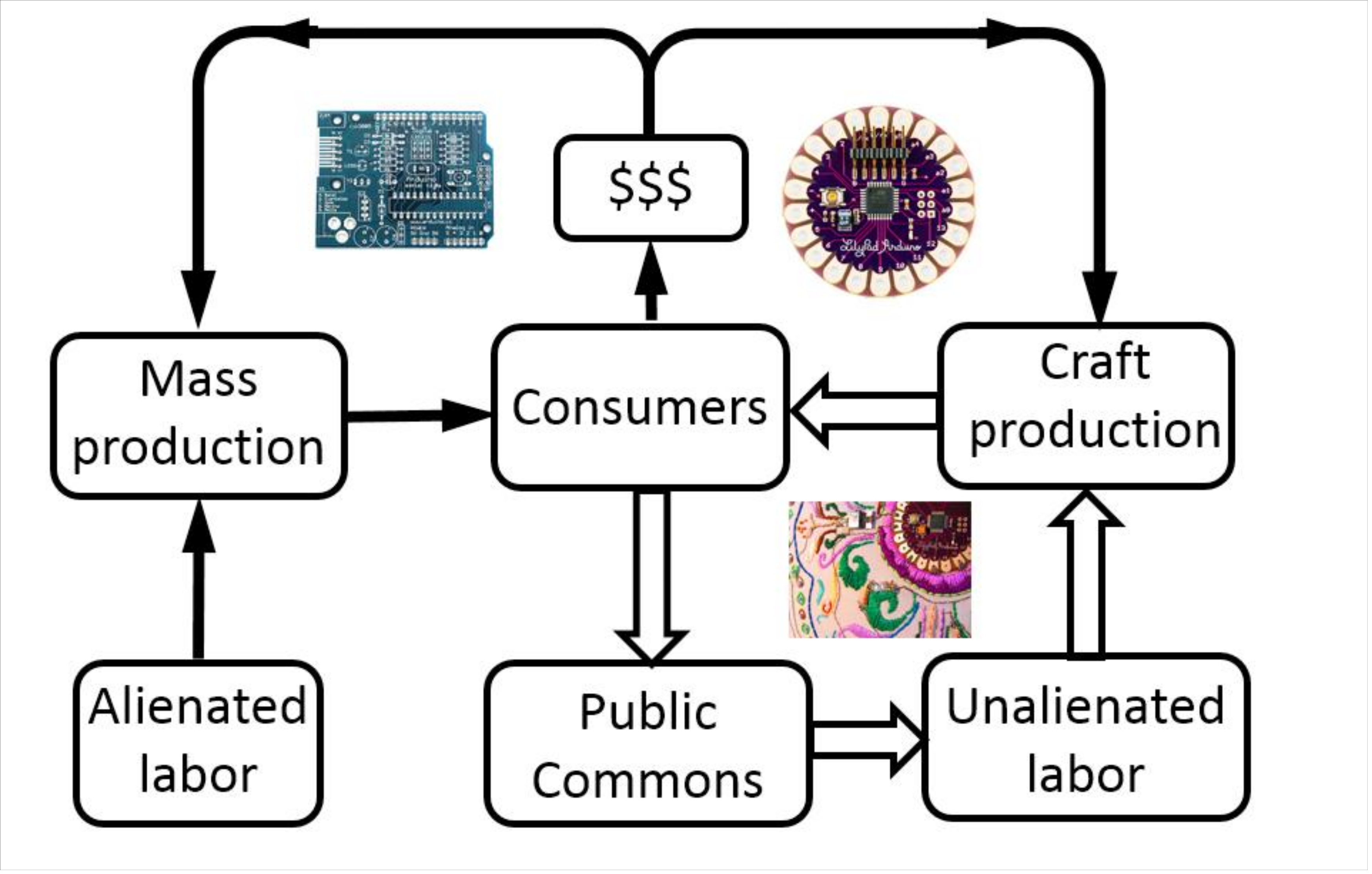 The thousands of “makers” in the Arduino ecosystem (in the lower right quadrant) create many gadgets for themselves, sometimes useful, sometimes just for fun. But they also do a lot of volunteer work for humanitarian purposes, such as innovations for disability, citizen science for pollution detection, communications for disaster relief, low-cost health electronics for developing nations, and the “MakerNurse” program which supplies nurses in developing nations with online resources and hardware tools (such as “MEDIKit”, a low-cost Arduino based platform for DIY medical gadgets) for a growing collection of nurse-made innovations.

The bridge, in this case, is the money coming from the sale of products created in the commons, sold in the capitalist market, and then the money funds more commons-based activities. This is necessary now because of the “catch” in cooperative economic networks, where they meet the capitalist economy on their edges and need money to provide resources that they cannot produce inside the network.

The second example is related to the post about Economic networks with chocolate: 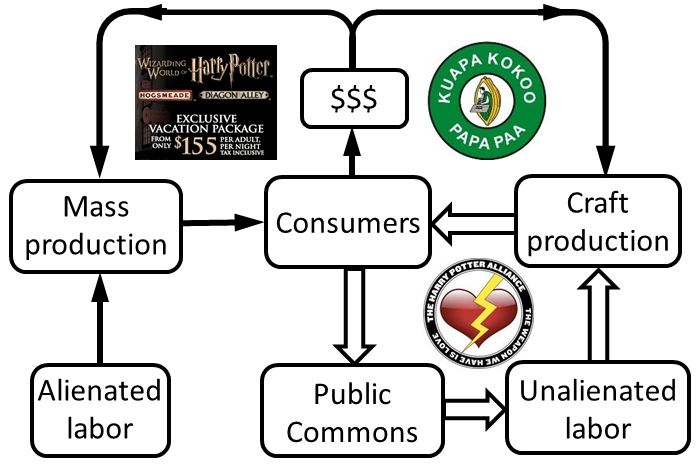 Eglash explains, When it comes to low-income African farmers becoming owners of a multimillion dollar chocolate empire, it’s hard to argue against generative justice. But most cases are more messy and incomplete. In particular, unpaid online peer production – forms such as fan fiction and community cookbooks—are often derided as too trivial to matter. One clear counter-example is the Harry Potter Alliance, an online network of fan fiction enthusiasts who blend the usual fan activities with humanitarian causes. In 2010 they began to petition Warner Bros to use fair trade chocolate in the Potter World theme parks and other franchise venues After 4 years of activism they succeeded in forcing the change. [The diagram above shows] the flows of value in this case. There are 3 cycles. At the upper left, the Warner Bros carries out the usual mass production techniques of any large corporation. At the lower right, the peer to peer production of the Harry Potter Alliance is more or less like any other fan club, albeit one with a strong humanitarian outlook. As detractors...might point out, no matter how effective its outcomes, it’s hard to see how unpaid labor can become self-sustaining; it will always be “parasitic” on the ordinary economy. But it is the presence of the upper right cycle [explained in the video in that related post] that makes this an extraordinary system. This kind of hybrid production which participates in both generative and commercial cycles holds powerful potential for change.

The hybrid cycle in that system is the same (in a generative sense) as the upper-right hybrid cycle in the Arduino system, where people work in a cooperative, not alienated environment, to create something they can make money from in the market economy and bring the money back into the commons environment.

Those hybrid bridges between the commons and the capitalist market are how most commons-oriented projects survive these days. Will take a commons community that can organize a whole community economic system, that can provision all the important needs for their members and their local environment, to escape from that situation.