Apart from the basic serial terminal communications, SSH, telnet, and login, it can also initiate secure file transfers via SCP and SFTP. Additionally, PuTTY acts as a secure SSH tunnel for X11 traffic.

Over the years, it has been used by network engineers, system administrators, developers, and all kinds of IT professionals. If you need to connect to a remote system, you’ll find Free Putty Download quite useful.

A powerful SSH and Telnet client PuTTY can be run on a Microsoft Windows machine to connect to a (for example) Unix machine or other cross-platform integrations. Simply put, It gives you a window, where anything you type goes straight to a Unix machine. 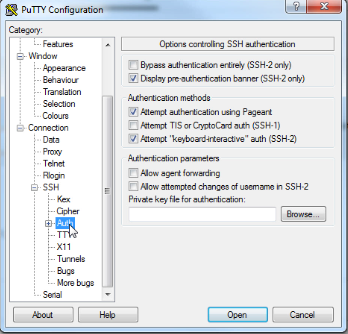 Once you set up PuTTY, the clean and simple interface reveals a comprehensive configuration pane. It allows you to manage and customize connections and sessions alongside the window and the terminal.

Users can choose from several connection types, such as telnet, raw, login, serial, and SSH, to set logging options for a specific session.

The comprehensive features available make PuTTY one of the most popular terminal applications.

Users can easily set alarms, keyboard actions, and use advanced features to tweak the behavior, colors, and appearance of the window.

The Connection area in PuTTY offers customization options for the Internet Protocol version.

Once you’ve successfully set up the connection, you can use the resources of a remote computer in a matter of seconds. Several IT professionals need to get remote access to computers on a daily basis.

Additionally, it supports a wide range of encryption algorithms, such as DES, 3DES, Blowfish, AES, and Arcfour.

Using PuTTY, you can take control via SSH encryption key along with the protocol version, while providing SFTP and SCP clients access through the command-line.

In addition to dynamic, remote, or local port forwarding, it also supports X11 forwarding, and IPV6 protocol, and authentication via public-keys.

Without a doubt, PuTTY is an excellent application for experienced users and IT professionals.

It comes in handy for people who need a reliable yet fully-customizable environment for their computer-to-computer secure connections.

The wide range of protocols along with execution speed makes it a pretty good choice.

Where can you run this program?

Originally written and developed for Microsoft Windows, PuTTY can be ported to several other operating systems. Currently, official ports are easily available for Unix-like platforms.

There has been a lot of talk about releasing PuTTY for macOS and Classic Mac OS. Some unofficial ports have also been released for other platforms, such as Windows Phone,Windows Mobile, and Symbian.

Is there a better alternative?

PuTTY is one of the most popular SSH clients for Microsoft Windows. The easy-to-use interface and small size make it quite popular among IT professionals.