Football Friday: Catching a Draft, the Eagles' 1st round of the 2022 NFL Draft edition. 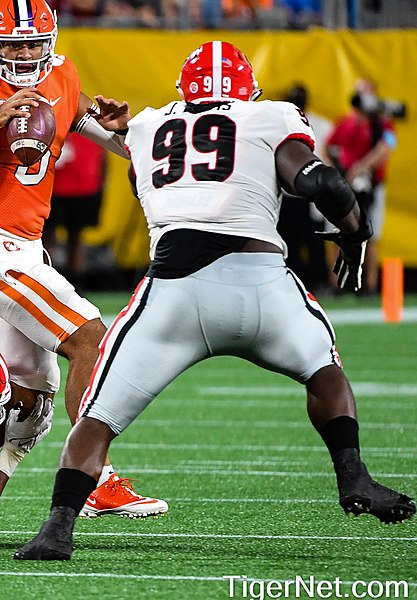 The Philadelphia Eagles started the draft with 2 first round draft picks, the #15 and #18 picks (they had a 3rd but a week or so ago traded it to New Orleans for several picks including a first round pick next year). The Birds moved up to #13 by trading their #15 and a few late round picks to select defensive tackle Jordan Davis from the national champion Georgia Bulldogs.

DT Jordan Davis is from Charlotte, North Carolina, and he’s huge at 6' 6” (198 cm.) and 341 pounds (155 kg.) but he can move. His 40 yard (36.5 m.) time is 4.71 seconds, which is great for a guy his size. The knock on him is conditioning, he carries a bit too much fat, and he gets winded easy. It sounds like he needs to do more cardio along with his bench pressing of Buicks. Trivia: his mother is an Eagles fan, and he likes Swedish women … er, I mean Swedish fish. The Maxwell Football Club awarded him the 2021 Chuck Bednarik Award. He’ll need a new number, at Georgia he wore 99, which is retired by the Eagles (it was Jerome Brown’s number).

At this point in the night, a lot of Eagles fans weren’t too happy. They wanted a safety, defensive end, or a wide receiver – but they are wrong. Safeties don’t often get drafted this high, though the Ravens with the next pick selected S Kyle Hamilton from Notre Dame. Baltimore already has a good defense, so they can get the most out of him, the Eagles need to improve their defensive line first. Pass rushing defensive ends are over-valued, everybody wants one. However, with more offenses going with a spread offense, defensive tackles are more important. Quarterbacks in a spread offense drop back just a few steps, so a DT that can get in the QB’s face is very disrupting. So yea, several DEs went before Davis, but he’ll probably be a better deal for the Birds. Several wide receivers went just before #13, but I’m guessing the Eagles either thought they would cost too much to move up to get, or GM Howie Roseman knew he had a deal for a trade in his back pocket. Also, the Birds have a horrible record picking WRs in the first several rounds.

Howie’s Back Pocket: the Eagles traded the #18 pick (& others) for the Titans WR A. J. Brown. Minutes later, it was announced that the Birds signed him to a 4-year contract extension worth $100 million ($57 million guaranteed). This wasn’t just done on draft night, it had to be in the works for weeks or months. Also, Jalen Hurts and A. J. Brown worked out together this off-season. In his 3 seasons, Brown has averaged 1,000 yards receiving on a Titan offense known for the run. Brown is also known for yards after the catch, so if Hurts can get him the ball in stride, then big plays should follow.

Whew, all that in just the first round of the draft. Rounds 2 to 4 are Friday night and rounds 5 to 7 will be Saturday afternoon. The Birds could still use some help in the secondary and a linebacker, but this was a good start to the 2022 NFL Draft.

Monday, I’ll review the full Eagles draft and see how they did in comparison with their NFC East rivals.

Photo Credit: This file is licensed under the Creative Commons Attribution-Share Alike 2.0 Generic license, by TigerNet.com. Photo from WikiMedia.