A few weeks ago I decided that I wanted to move away from a subscription-based #music streaming service to a self-hosted option that allows me to play my music files (funkwhale). Unfortunately, all of my physical CDs are gone and most of my digital copies are incomplete due to service-hoping in the early 2000s. I was able to scrape together about 2k tracks to get me started (down from roughly 15k).

In order to build up my library again, I wanted to do something good for a change: support the artist. Every week I plan on purchasing two albums (I'm not made of money) directly from the artist (if possible). As part of the process, I want to do a little write up of what I'm listening to. I'm hoping this process will help me connect more with my music library and make intentional decisions.

Enough preamble, let's get into a review of Infradig: Clinical Indifference / Psychology of Breathing. 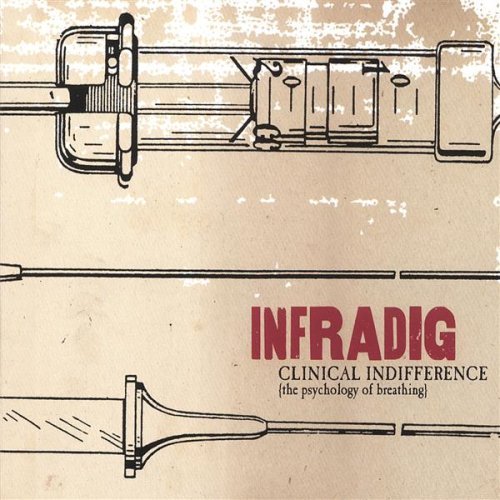 So this is a bit of a hipster deep dive (my interest are usually more mainstream). Infradig is a NuJazz trio from Chattanooga, TN that put out a few albums in the early 2000s before disbanding in 2007. My brother went to #Bonaroo in 2006 and they were handing out CDs for the poor souls waiting in their cars to get into the festival. This album was what was being handed out, and it's what I decided to listen to today.

The album is entirely instrumental; featuring drums, jazz guitar, and the keyboard. They also include some interesting audio samples from pop culture of the early 200s. It makes fantastic background music while working on #code.

The first title track, Clinical Indifference, sets the vibe for (most) the album. It's something you can bop your head to, but wont be so distracting that you'll loose your place in whatever you're reading.

In a hard whiplash, the second track (Gravel Tooth) is chaotic, noisy, and much higher energy. This was released as a stand-alone EP before the album and has some great artwork that I can no longer find. This sounds like a lot of their other work, but I like the quieter stuff by them.

Up next are a pair of my favorite tracks: Fallout Intro / Fallout. The intro track is a quiet piano piece that has different layers of audio samples played on-top of each other. I've tried hard to track down some of these samples (“I worked nights at the time...”) but have so far been unsuccessful. The only one I can make out is a line from Requiem for a Dream. It's a really pleasant track intro into a song that slowly builds up layers of the jazz trio. Eventually it comes crashing to pieces. It feels like something that would easily fit into a movie soundtrack.

A Trifle (Consoles Because a Trifle Troubles) is a silly child-like track. I'm fairly indifferent (hah) to it. Same with the Interlude track that separates the two sides of the album.

Boggart starts off the second side of the album and is a great showcase to Josh Green on the drums. It also includes some audio samples – one of which I was able to track down. The audio at the end was from the film 28 Days Later. I remember re-watching the film years later and jumping up when I heard it!

Shadowsphere is the closest thing I've heard to weather channel music (at least to start) and I absolutely love it. Might be my favorite track.

Muttering/Shrapnel is loud and frenetic (similar to Gravel Tooth).

The second title track, The Psychology of Breathing, feels like a sped up version of Shadowsphere.

The album ends with Undulation which is another blend of quiet reflection, building in intensity, and with a loud finale (similar to Fallout).