Smartphone is a parasitic distraction

You know the scenario. You're sitting (on the couch, in bed, on a train, wherever!) and find yourself between tasks. Next thing you know, some indeterminate period of time has passed as you use your smartphone to check social media / surf the web / play a game. No big deal really but stop for a minute – cumulatively, how much of our lives do we now spend mindlessly doing this instead of, well, pretty much anything else that could enrich us?!

I've already largely dumped social media, just maintaining a Facebook Messenger presence that I check every couple of months and may delete if I can get around to sorting out alternate communication channels for those left on it. I've de-Googled my smartphone (still need to write a follow-up post on that). I've never been big into computer games. I've taken my work email off my phone (too tempting to check outside of work hours). However, I still find myself spending way too much time checking a regular list of websites multiple times through the day, just so I can satisfy that itch to play with the phone.

How to break this habit? Well, I could get rid of the smartphone altogether. I was a late adopter, using a non-smartphone as my primary mobile device right up to the start of 2017, the last couple of years of that with an old iPhone as an occasional Wifi-only helper. However, that now seems a bit extreme as the convenience a smartphone offers is too much to totally resist. There are also a whole load of modern e-ink phones coming out with more streamlined functions that could act as middle ground between high tech and low intrusion into daily life. Another Write.as blogger mentioned a few awhile ago. Not sure I can justify the outlay though.

So where does that leave me? Well, I'm going to try an experiment. I've de-cluttered the first screen of the phone, leaving on it just a few apps, sourced from the /e/ Apps Store, which gives a nice privacy rating for all of them: 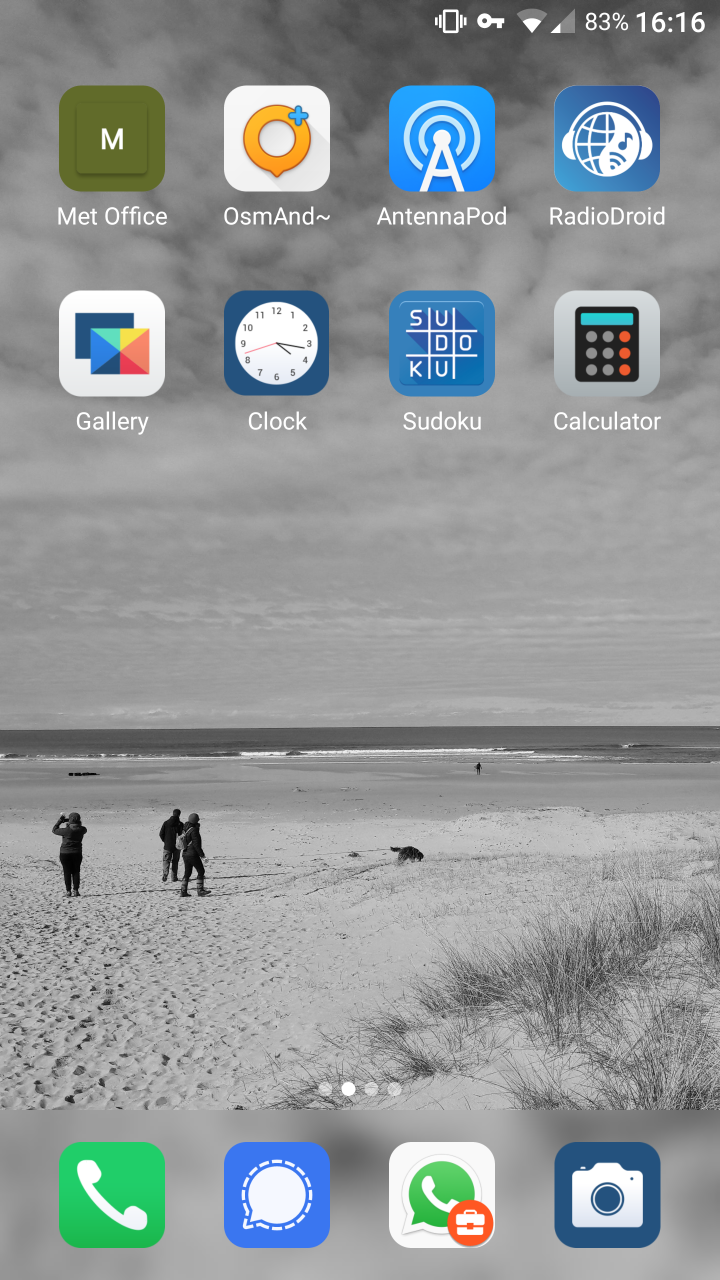 On the bottom bar I have Phone (remember, the original purpose of these devices!), Signal as my preferred messenger (also looks after SMS for me), WhatsApp running under Shelter (I'd do without WhatsApp if I could but it has way too much market penetration and I value staying in touch with people), and Camera.

No browser on the front page. I may come to regret that and if I find myself really needing one I might put Firefox Focus on as a compromise. It doesn't support multiple tabs or bookmarks so should offer a distraction free way of accessing the web when needed. Swipe onto the next screen and there is just the Settings icon. I wanted an extra layer between me and temptation, which lies on the third screen in the form of neatly organised folders containing >60 other apps.

I don't know if this experiment will work but it's worth a try! This is another attempt (along with de-Googling) to return to the sensation that my phone is a useful tool for me rather than the nagging feeling that I am a tool for sending an endless stream of user data to non-sentient algorithms around the world that serve me up curated content to keep me hooked in a toxic, parasitic (rather than symbiotic) relationship.

Who is the parasite though, my phone or me?

Entry 40 of my participation in the “100 Days to Offload” challenge – find out more and join in!