When I think “SaaS,” I think business. And I don’t think all “SaaS business” logic applies well to a consumer-oriented product like Write.as.

For a while, I've been looking to dip our toes into payments / monetization for writers on Write.as and WriteFreely. I've taken a “wait and see” approach to this so far, but now we're starting to experiment with some ideas.

The last several months have zipped by for me. But Write.as is about to enter a new phase that I'm pretty excited about.

While our focus until now has mostly been on individual users, as a business, today Write.as is starting to look at how we can support a new set of customers: other businesses and organizations. I'm excited about this not just because of how easily our software works in that space, but because it gives us a solid plan for long-term sustainability.

The consumer-focused prices we built our business on have made our road to sustainability long and slow. Really, they tend to only work when you're building a side-project, are backed by venture capital, or don't need to pay the people working on the thing. But today we're no longer a side-project, we still refuse to take venture capital, and yes, we pay people.

The road has been long, but we're in a good place as a business. Now I want to get us to an even better one. Which brings me to this next stage.

The past several months have shown me the many ways WriteFreely, the software behind Write.as, is useful. Make something simple enough, and it will find uses in ways you never could've imagined.

After seeing all these uses, listening to feedback, and considering our four-year history, we're finally settling into a very interesting use case we'll be pursuing next: knowledge-sharing within businesses and organizations. It's called Write.as for Teams, and will run entirely on WriteFreely.

This will be a new service offered in addition to our existing hosting for individual writers. Really, it's a natural evolution from the WriteFreely.host service we launched late last year. But unlike that service, Teams has a very specific audience in mind, and will be priced for businesses. We've been using it internally at Write.as, and it's really working out nicely so far.

I'll have more to share when the service eventually launches. But I just wanted to explain what's going on behind the scenes so everyone knows why other promised features have been temporarily put on the back-burner. We haven't gone anywhere or forgotten about you — we're just preparing for this new world we're about to enter as a company.

Just as well, our progress on Teams will continue to circle back and improve Write.as for everyone. As one example, an early Teams customer has driven our decision to speed up development on the v2.0 command-line client release, which any Write.as user can use. It'll be soon followed by our first official WriteFreely client, also for the command-line.

Beyond that, the underlying WriteFreely software will continue to improve for everyone, while stubbornly sticking to its goals of ultimate simplicity. I can't wait to see the new uses it finds, and to hear what you think.

Tags in the Fediverse

Now #hashtags are included in the Write.as post data sent out to the #fediverse! This means that besides helping organize your writing on your blog, hashtagging your posts will make them show up in searches too, like this: 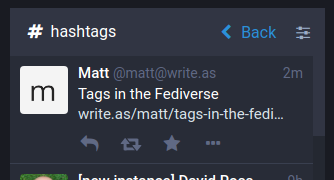 We also support #CamelCase tags, and encourage everyone to use them to help visually impaired people reading your posts.

Next I'll include any image attachments, and then the only remaining feature to complete this basic implementation is to support scheduled posts. Once that's done, I'll move on to fixing interoperation with other platforms besides Mastodon.