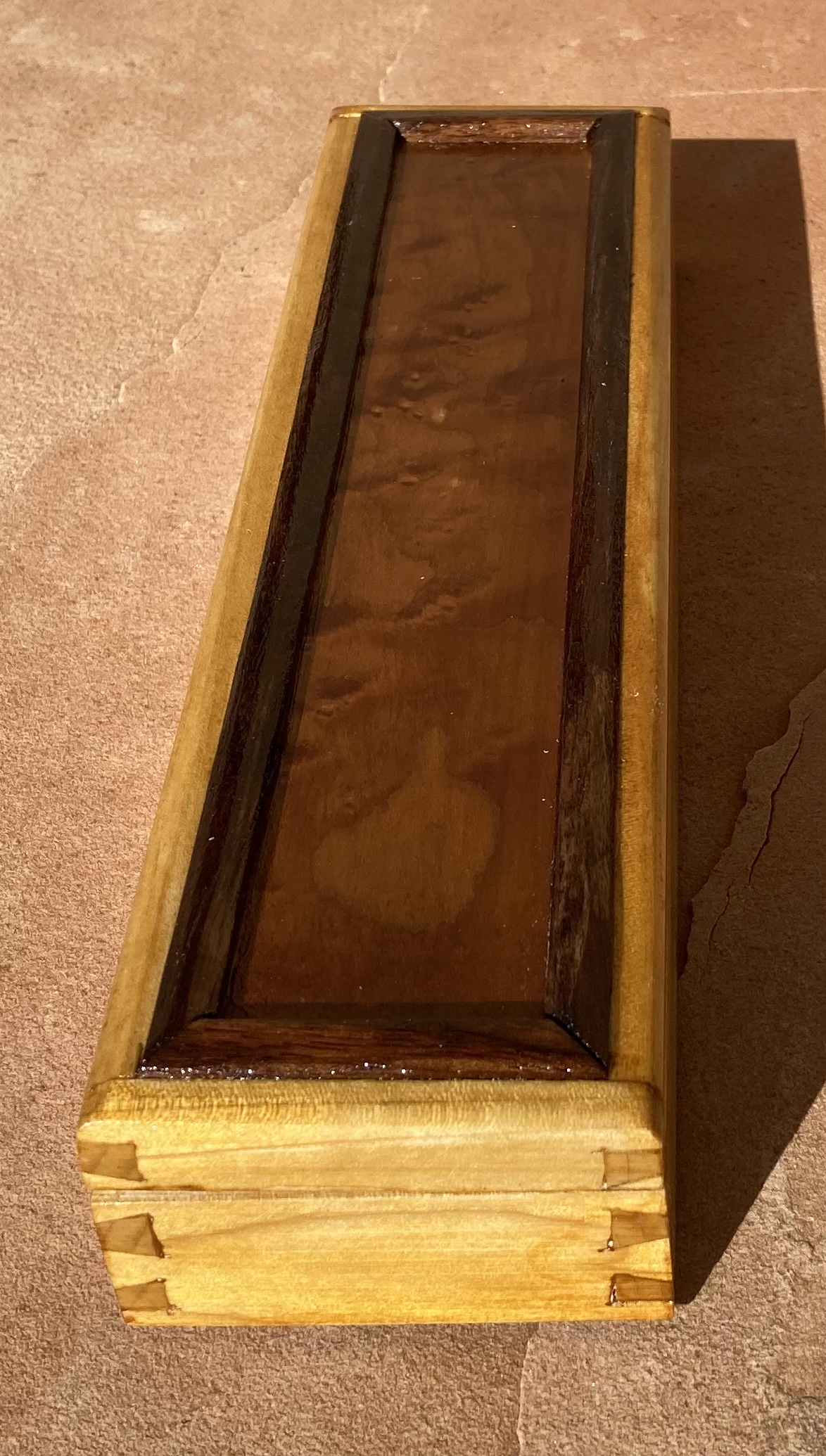 To go with the knife I made recently I made a box to go with it.

The box is poplar, with torrefied curly maple top and bottom, and a bit of walnut trim to cover the imperfect joints. 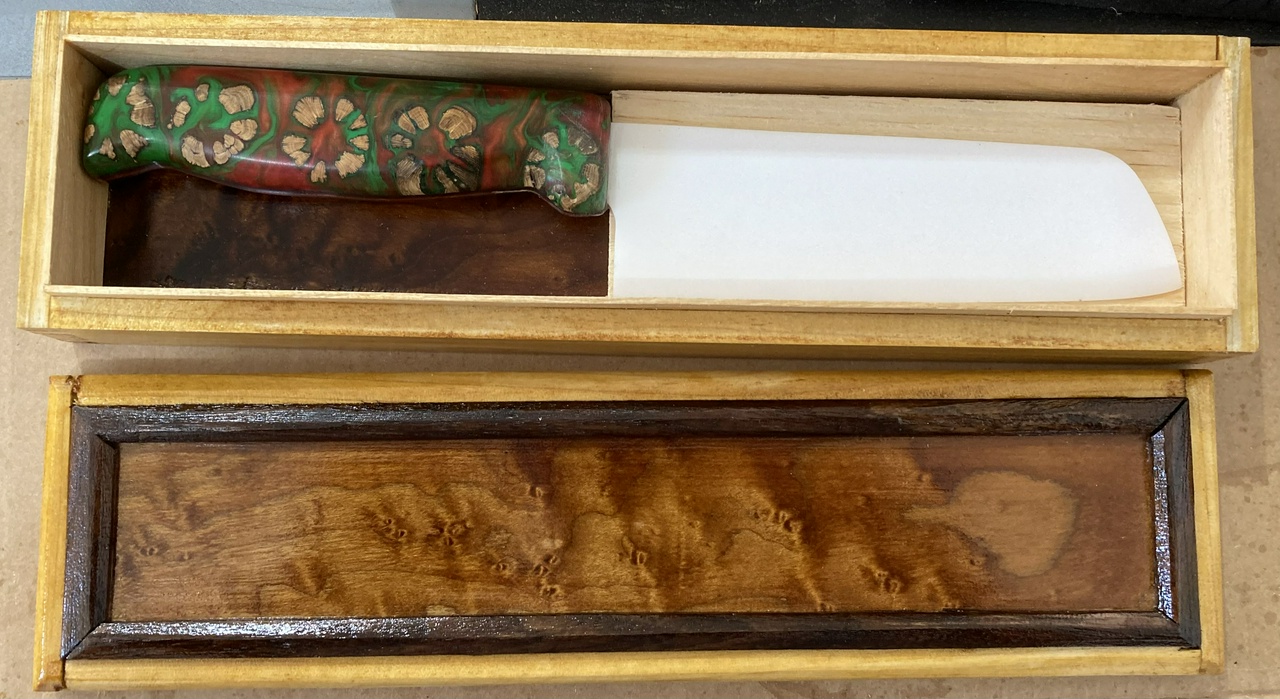 The knife sits on a removable piece of pine, and is held down by a bit of closed-cell foam. The box is a close enough fit that the knife can’t move much, but with the removable bits, it will be able to be reused for another gift. 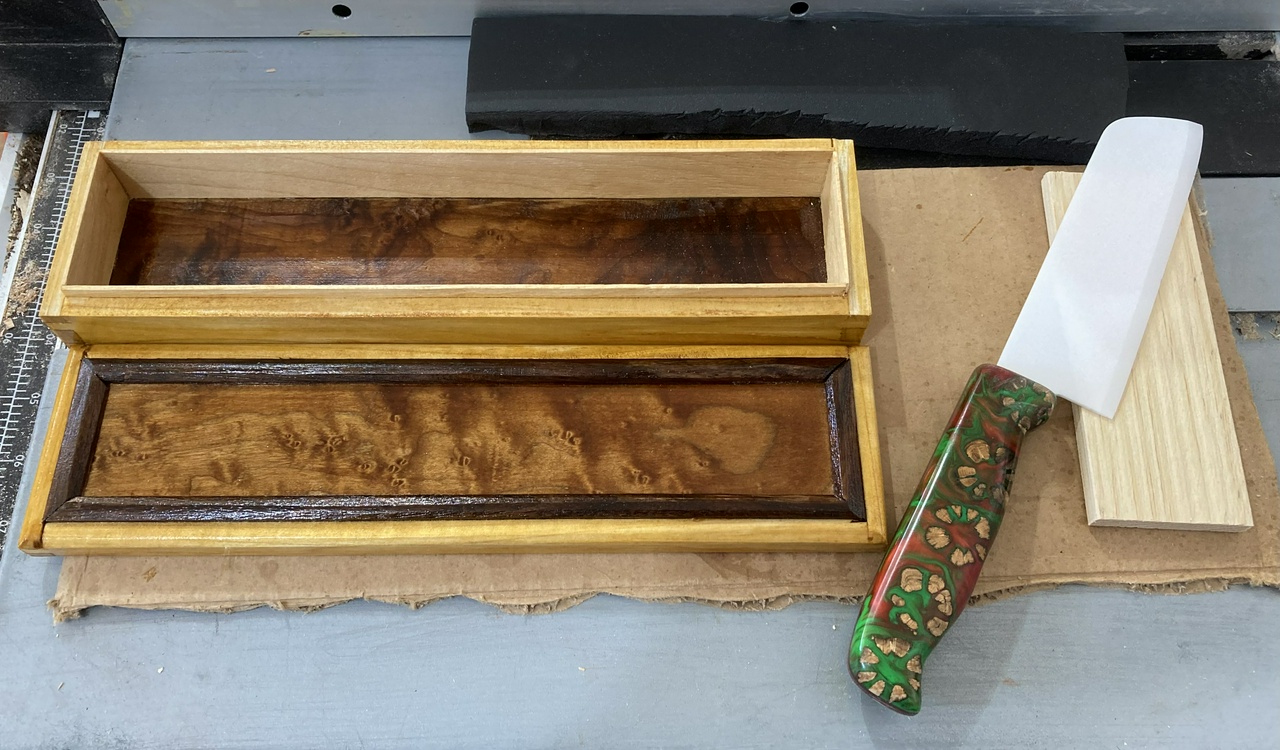 The finish is a coat of tung oil, followed by four of five coats of shellac, with one of the coats on the poplar being garnet shellac to offset the slight greenish tinge of the poplar.

Another knife that came out of the shop during the recent flurry of knife-making. This one has a handle of cholla with red and green resin which was poured by a friend of mine in Texas in exchange for me sending him a box of cholla canes. Seems like a good trade to me.

The blade is a 6 inch white ceramic santoku which used to be sold by WoodCraft, but was discontinued a few years back (before we moved to New Mexico, so three or four years ago). When I saw the bright colors of the handle, I remembered I had the white blade and thought it would be a good-looking combination. There are also layers or red and brown micarta between the scales and the knife tang to build up the thickness a little. It feels pretty good in the hand to me.

The handle was rough-cut on the bandsaw, then shaped with rasps and files. It was hand sanded with 80, 120, 180, 220, and 400 grit sandpaper, and a coat of tung oil applied before buffing it with the Beall Wood Buffing system. I’m pretty pleased with this one, and think I’ll be giving it to a friend as an early Christmas present. 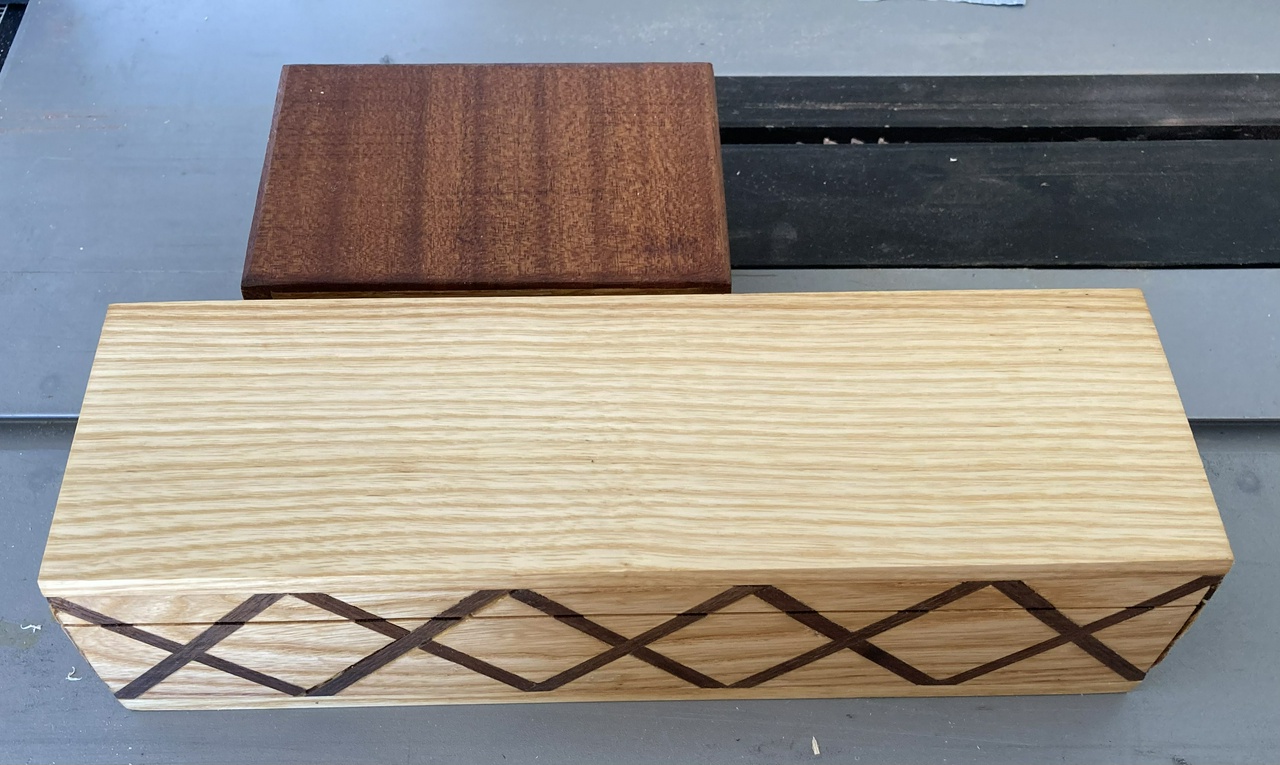 On Lumberjocks, we periodically do swaps, in which each person in the swap makes an item and sends it to another person. Everybody makes one, sends ones, and receives one. It’s a lot of fun, and I always try to do something a little beyond what I’ve done in the past.

This swap was a knife swap, and I wanted to make a folding knife. I got the mechanism from Santa Fe Stoneworks and dug out some stabilized birch I have left from Minnesota. It originally came from some wind-downed trees at Timber Bay Lodge, where we stayed on vacation back when we lived in Minnesota.

The folding knife came out ok, but there was a small chip in the birch on one side which I felt bad about. It still looks good, but it’s not great. I decided since I had a little more of the birch left, I would make a pair of cooking knives to make up for the blemished pocket knife.

I used blades from Hock Tools, specifically their paring knife and 5 inch chef knife. The paring knife got the more sedate grain from a straighter piece of wood, and as the wood was thinner than idea for knife scales, I sandwiched in some brown micarta.

I think the paring knife came out relatively well.

The chef knife got red (aka “fire”) micarta and some birch with some fairly crazy grain. It was from a crotch in the tree, and most of the grain ran the wrong direction for the strongest knife scales, but it looked pretty great visually, and the micarta and the metal tang of the knife would provide plenty of strength.

The chef knife came out pretty good, too. There’s a couple cracks in the handle that opened up when I was epoxying them to the micarta, but I filled them with sawdust and CA glue.

Finally, I made a couple boxes to hold the knives. By this time I knew who I was sending the knives to, and my guess was that the guy would get the folding knife, and his wife would get the cooking knives, so I wanted a separate box for each.

The cooking knives went into a box made of ash and walnut, with the walnut inlaid into the ash. I thought it looked pretty neat, and it’s a technique I’ll try again (probably to better result). I also made an insert to hold the knives securely in the box and to carry the care directions.

The pocket knife went into a foam insert inside a hinged box made of white oak and sapele, along with the description of the blade. 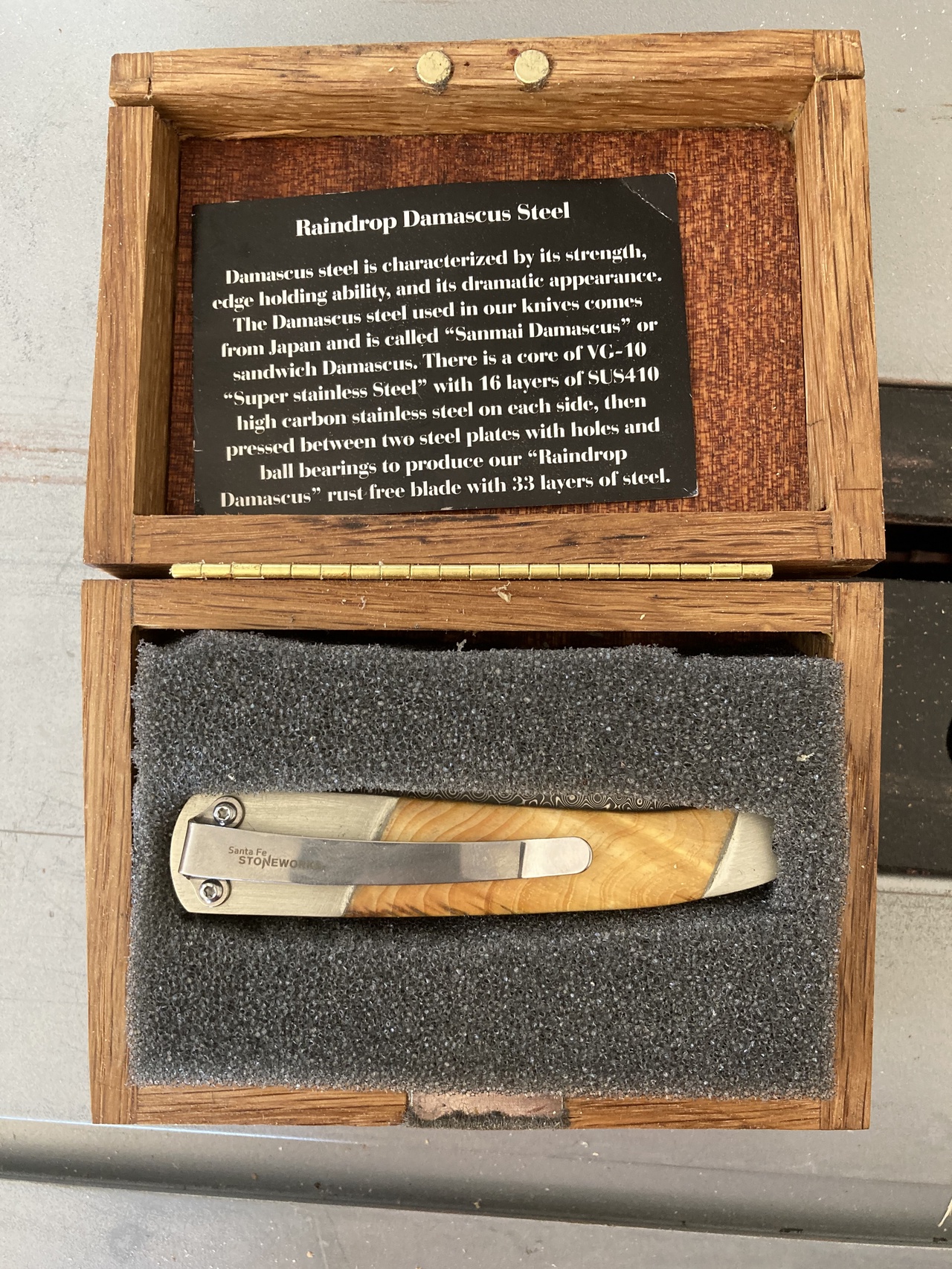 I made a pin vise, useful for both hand drilling holes with small drill bits, as well as holding small parts while working on them.

The chuck is a small chuck bought off eBay that will hold a bit up to ¼ inch in diameter, and down to the smallest drill bit I have (a 1/32 inch bit). 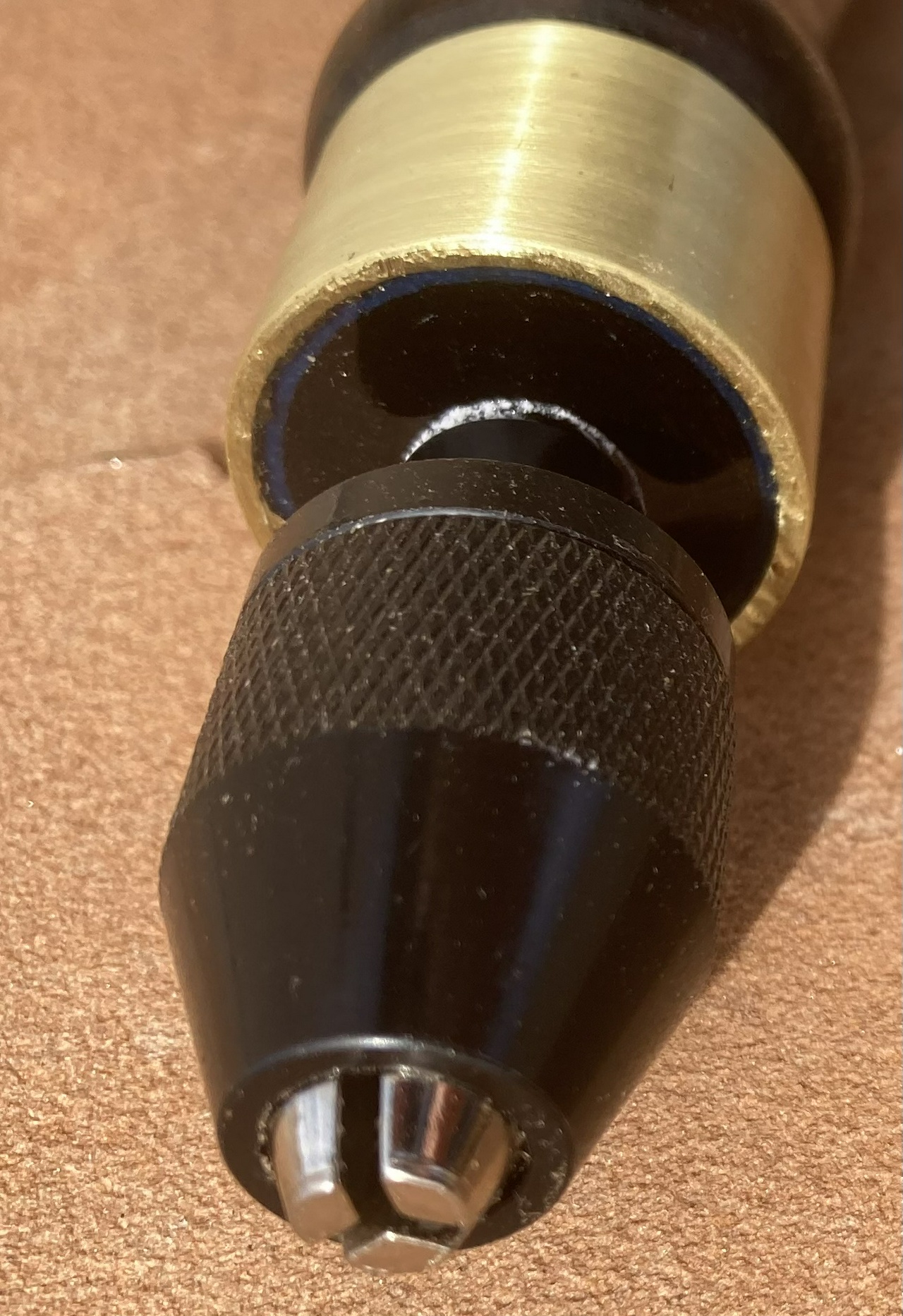 The handle is ziricote, a Central American hardwood that has interesting “spiderweb” grain patterns and a piece of 1 inch brass tubing as a ferrule, epoxied onto the handle. Finish is a coat of tung oil and a few coats of shellac.

It will likely be a gift for a friend, and I’ll make another for myself using some domestic hardwood. 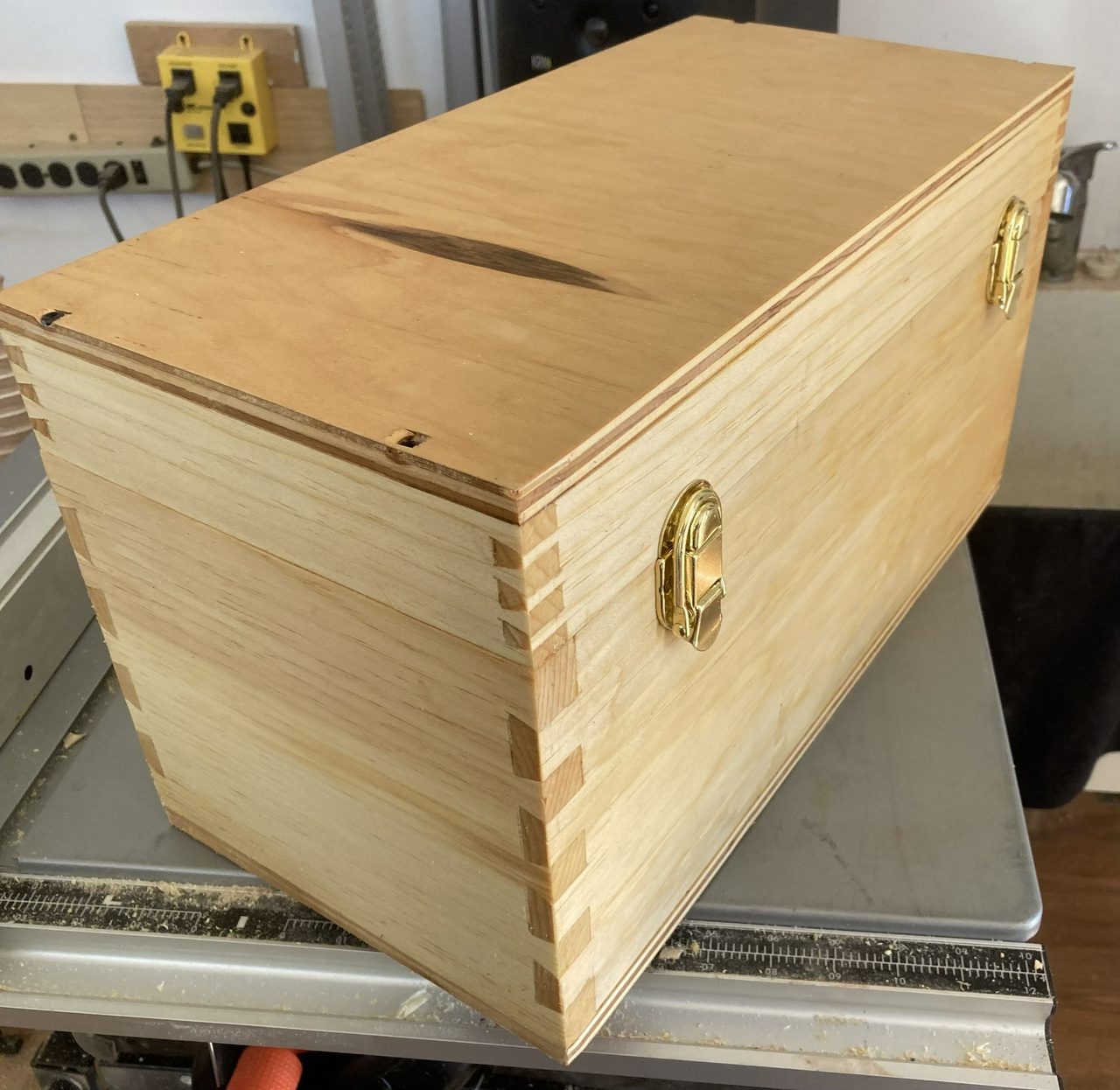 In my ongoing quest to organize and clean up my shop, I made a box to hold my cordless circular saw and spare blades for it from some pine and plywood. The box was built in two parts, as I didn’t have any pine boards tall enough to make the entire box in one piece and then cut it apart, so the dovetails on the corners look a little strange. The pine is, again, leftovers from my bookcases. The plywood top and bottom are from a neighbor’s garage sale last year, and were free. 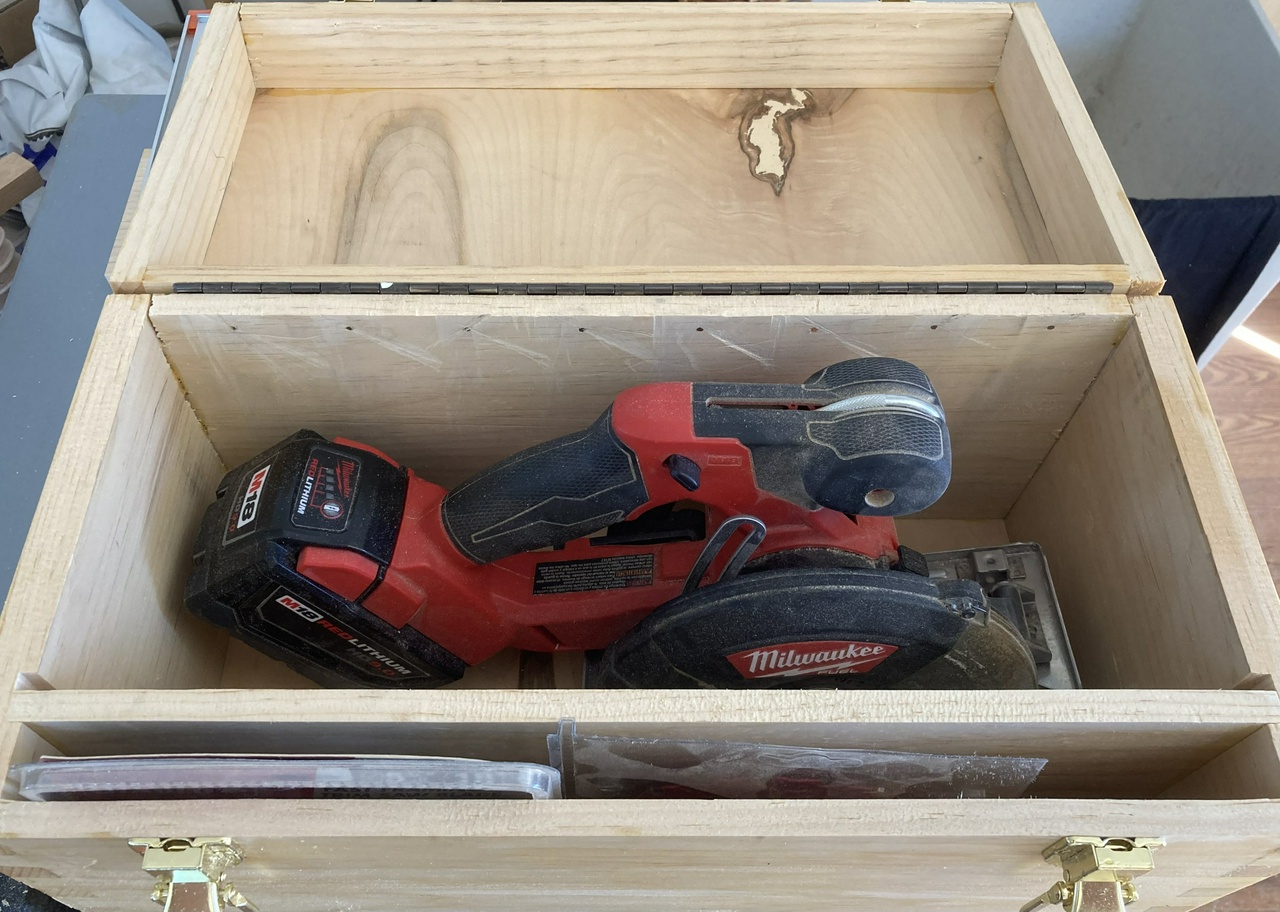 I put an insert in the bottom to separate the saw from the spare blades. Nothing fancy, it’s just glued into a pair of dados. 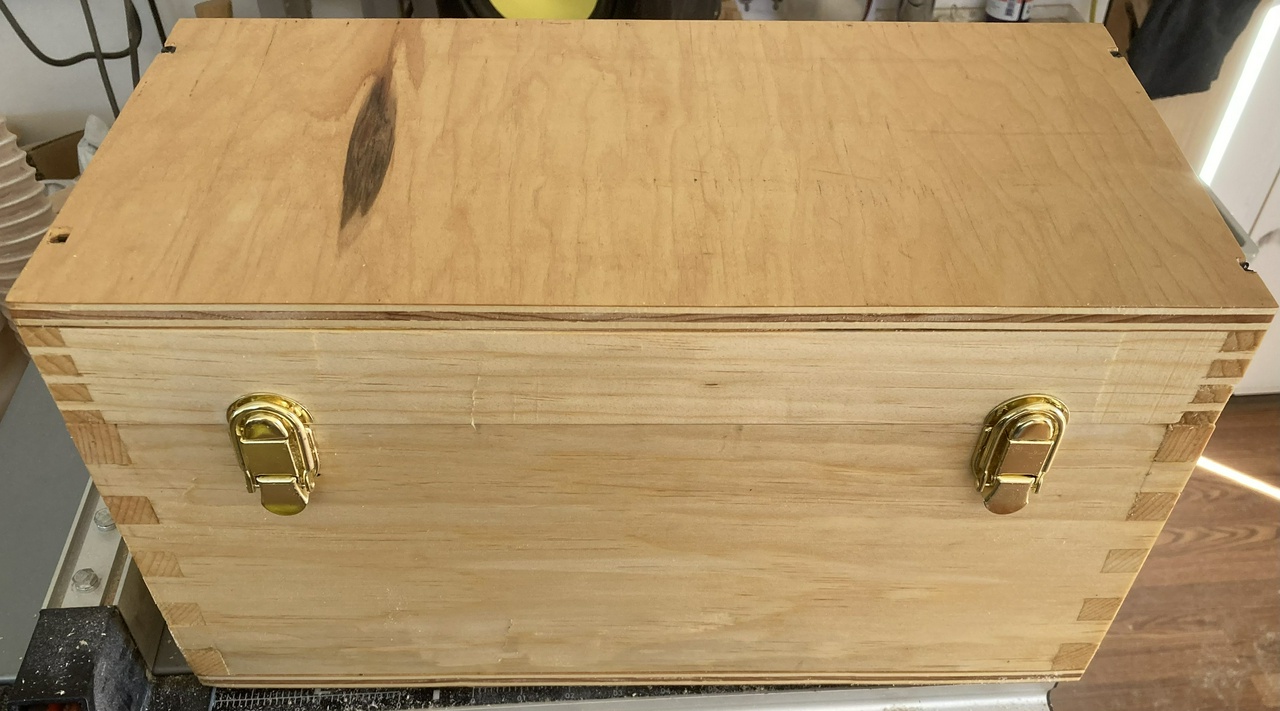 One the bottom was complete, I built the top slightly larger than the same size, then trimmed it to match the bottom. Then glued and screwed on the top and bottom, added a piano hinge and a couple latches, and it’s done. The only snag was that the only screws I had for the piano hinge were ¾ inch long, and the wood I was putting them into was only ½ inch thick, so I cut them flush with a flush-cutting hacksaw and then filed them smooth. And ordered some #6x½ screws. 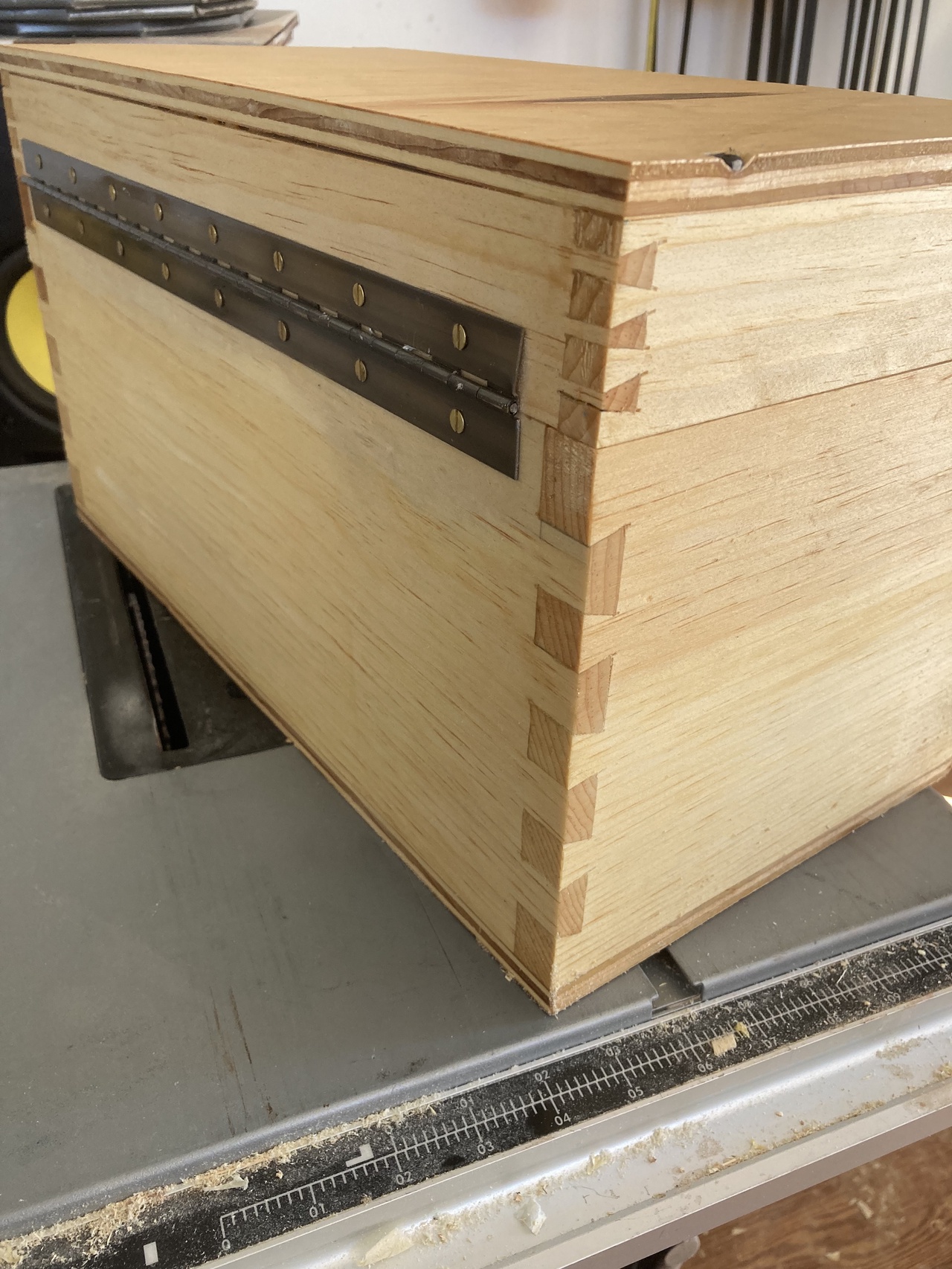 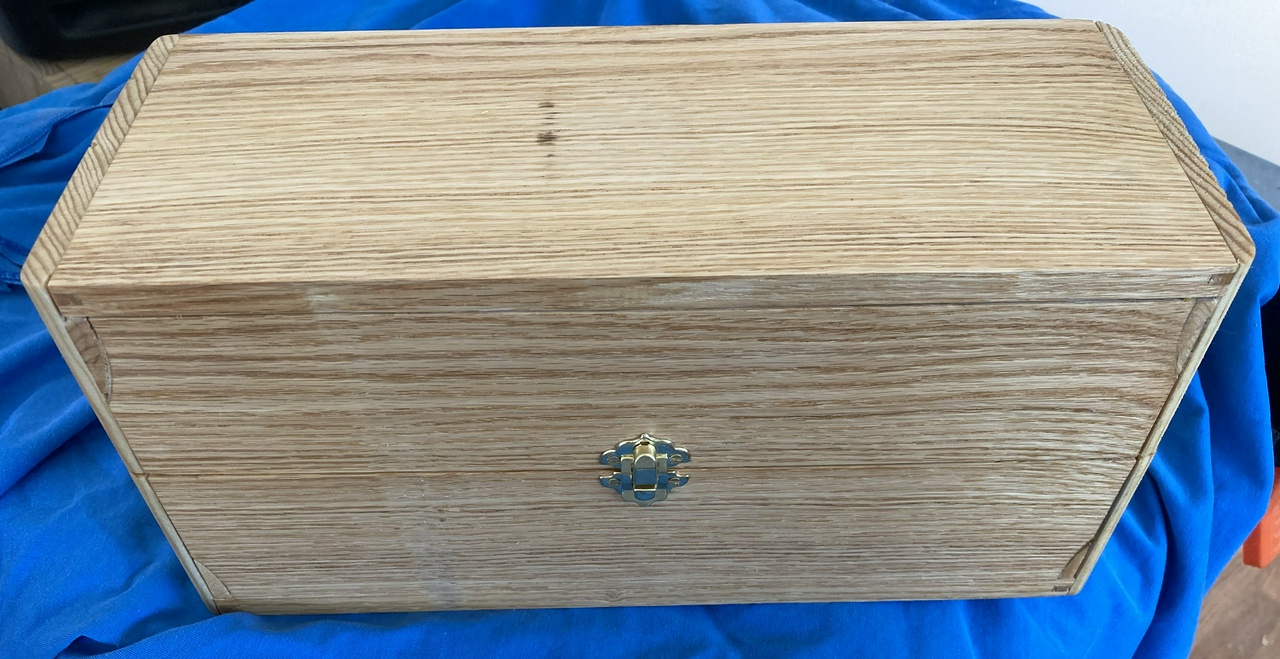 In the ongoing process of cleaning up the top of my workbench, I needed to turn a couple handles on my lathe. And when I went to do so, I discovered that the buffing wheels I had bought a month or two back were still on the lathe, with no safe place to store them. So! Time to build another box! 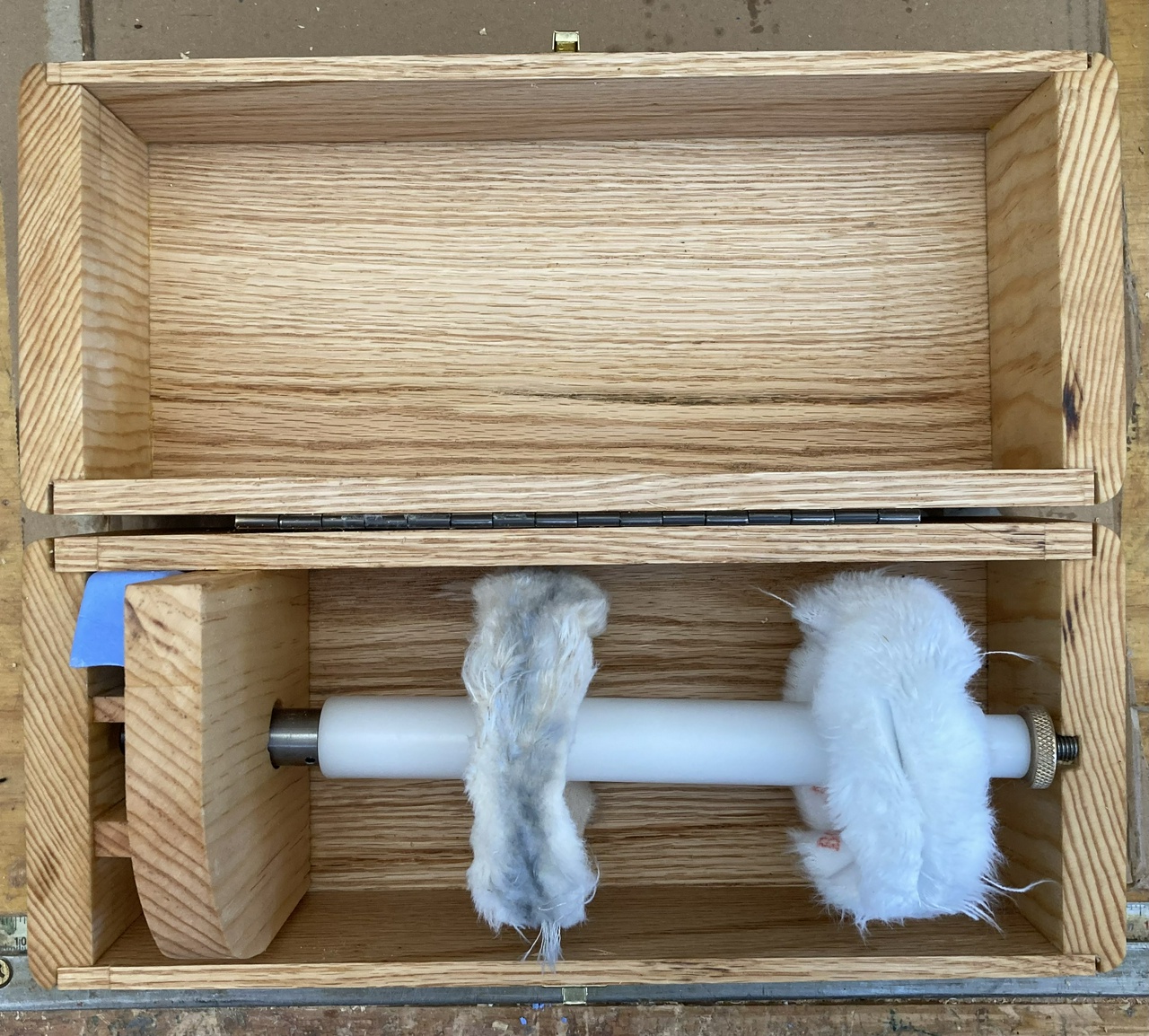 I started with four oak boards that I scavenged from my sweetie’s old desk-topper. It was a large, solid lumber project made for her by her dad, and when we moved across the country, she didn’t want to move it, but we didn’t want to waste it either, so I broke it down into boards. These four boards were the doors on it, and had breadboard ends joined to the centers of the panels by dominos. I thought I would be able to avoid exposing them, but on one side I did expose the dominos. Oops! 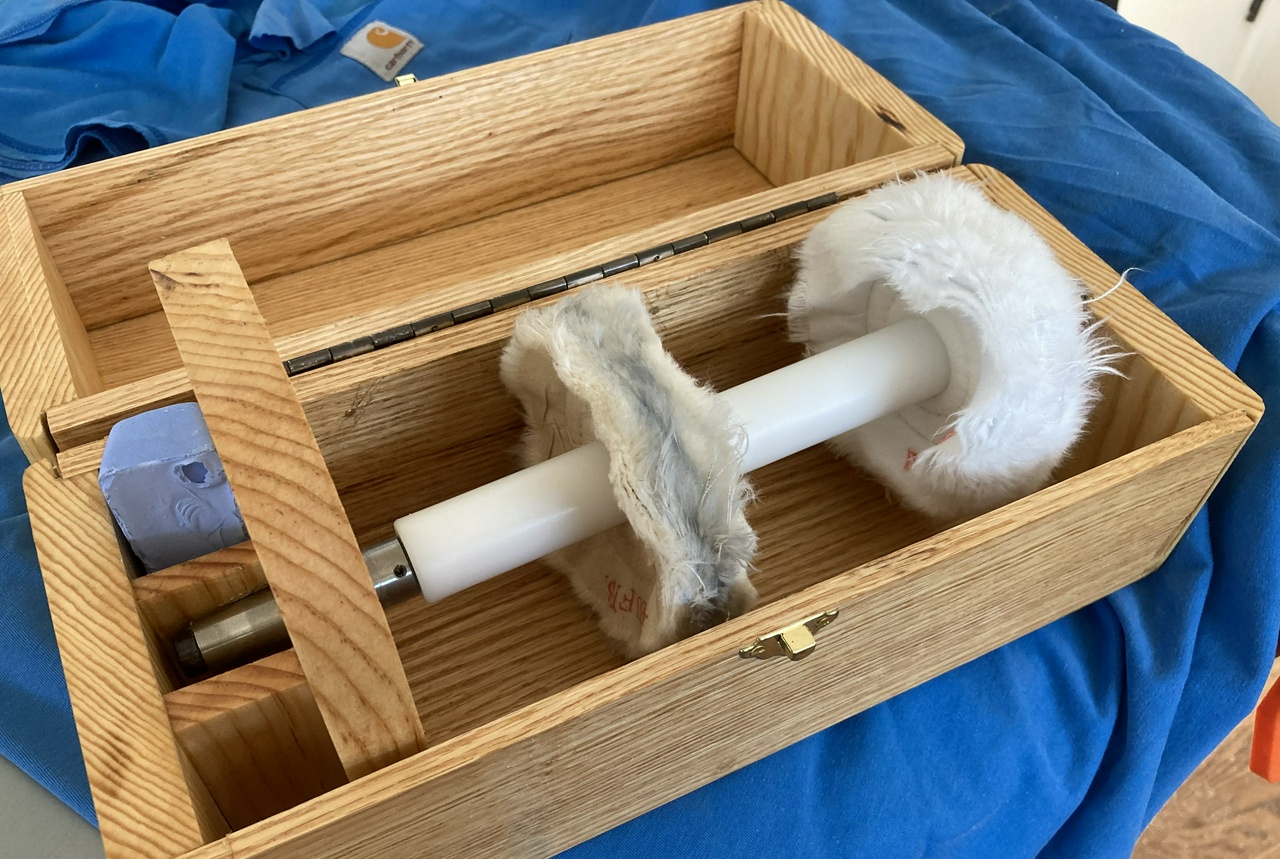 Construction is pretty simple. The ends of the box are pine with a rabbet cut on all four edges. The oak panels are glued into those rabbets, with simple butt joints between the oak panels. Then the box was cut in half, an insert was installed to hold the shaft for the buffing wheels, and a couple small pockets were made to hold the sticks of buffing compound. Everything was finished with a coat of tung oil and a piano hinge and latch were installed. Done in a couple hours on two subsequent days. 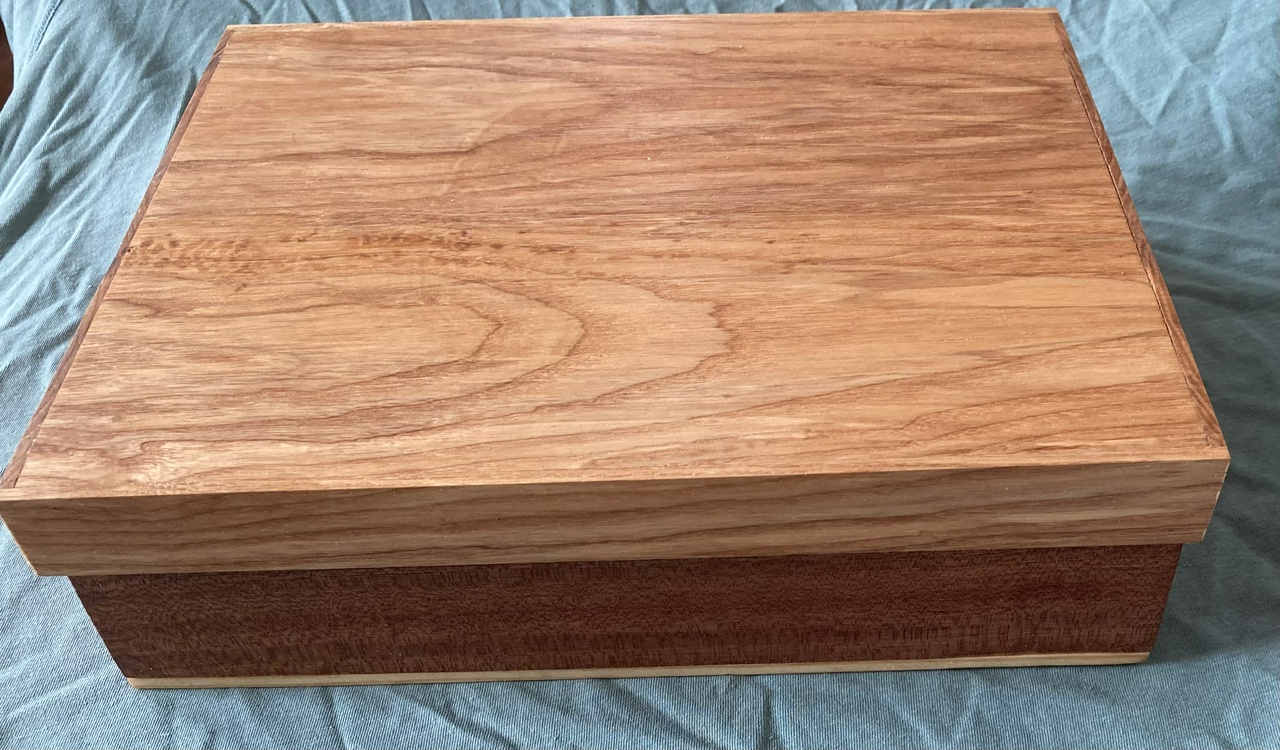 After making my the sheath for my knife I realized I needed better storage for my leather-working tools than a plastic bag. So I dig through the scraps and found some nice sapele that was leftover from an earlier project.

I had resawed a board of 5/4 sapele into two ⅜ inch thick pieces, and had a piece that was about ¼ inch thick remaining. But my technique wasn’t great, and the kerf had wandered a bit, so by the time I was done smoothing the boards, I was down to 3/32 of thickness left. That’s pretty thin for a box, but with the liberal use of some other scraps as glue blocks, I managed to make it work. 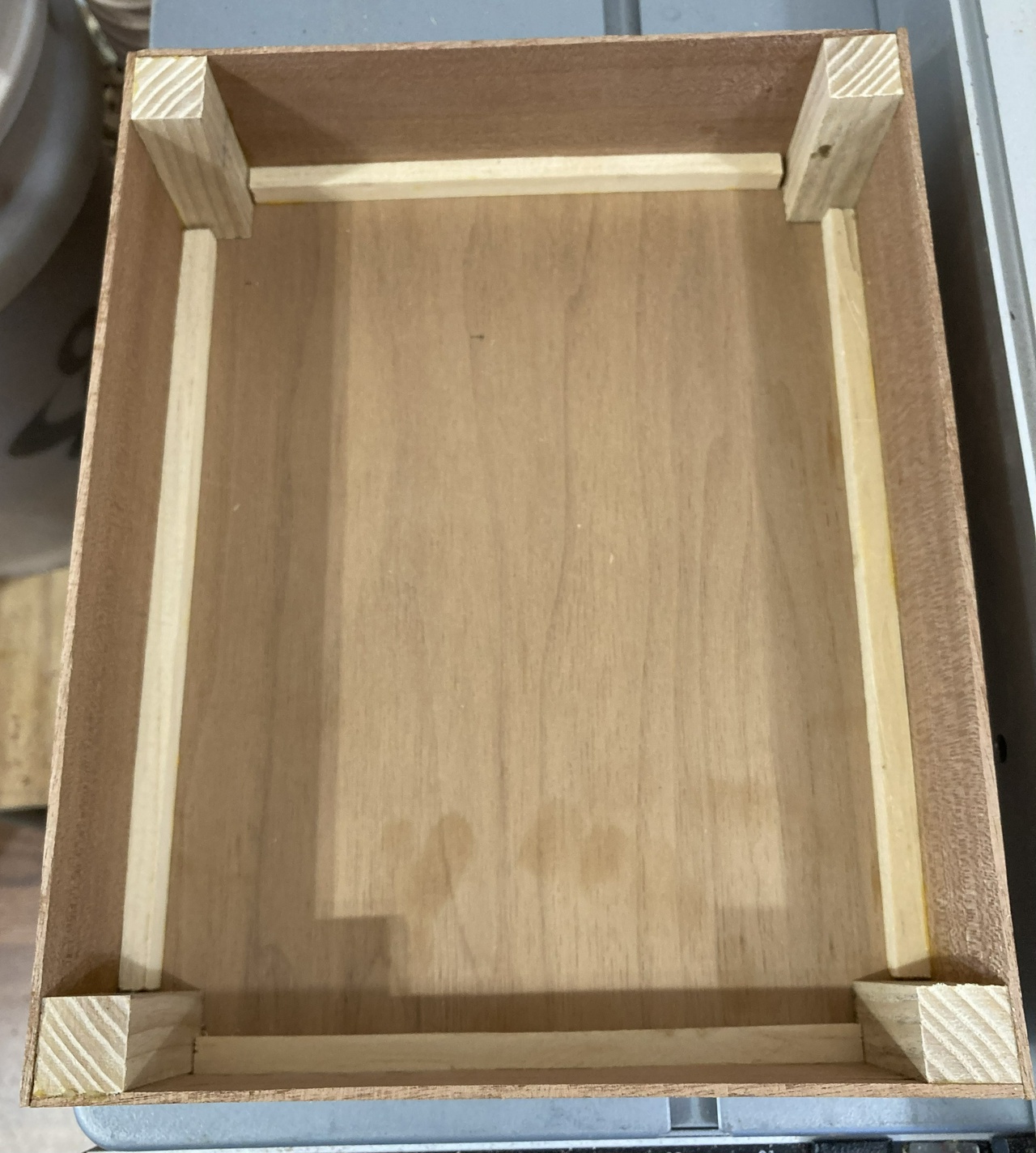 With the bottom built, I went searching for a top. I had two book-matched boards of elm that had been resawed to ¼ inch thick, so I glued them together, then cut it down in size until it matched the size of the bottom. With some more glue blocks, I managed to make a top that fit. 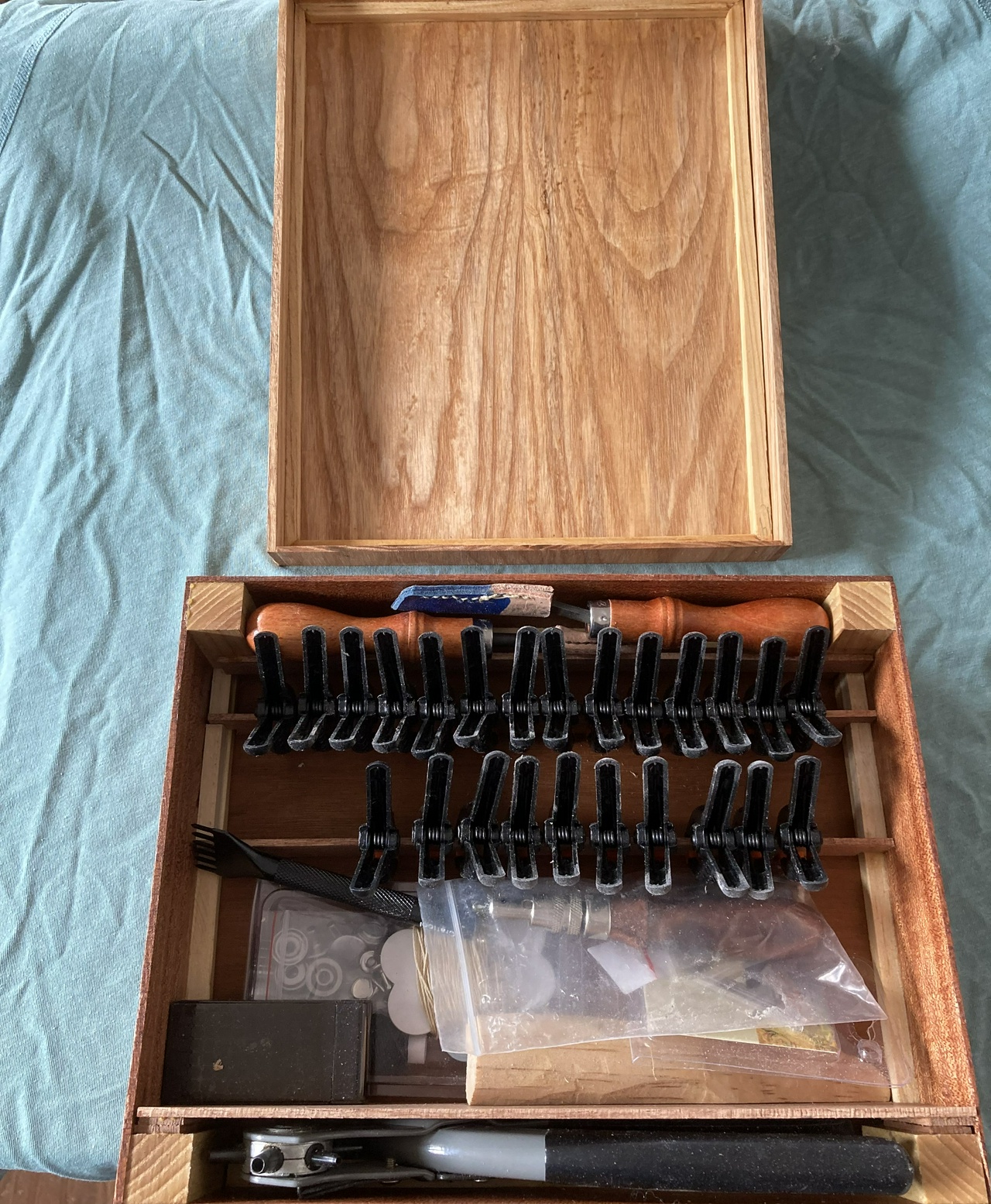 I added some inserts to hold things in place, and coated it all with a coat of tung oil, and here we are. One more set of tools now have a home so they can all stay together, and not clutter the top of my workbench. 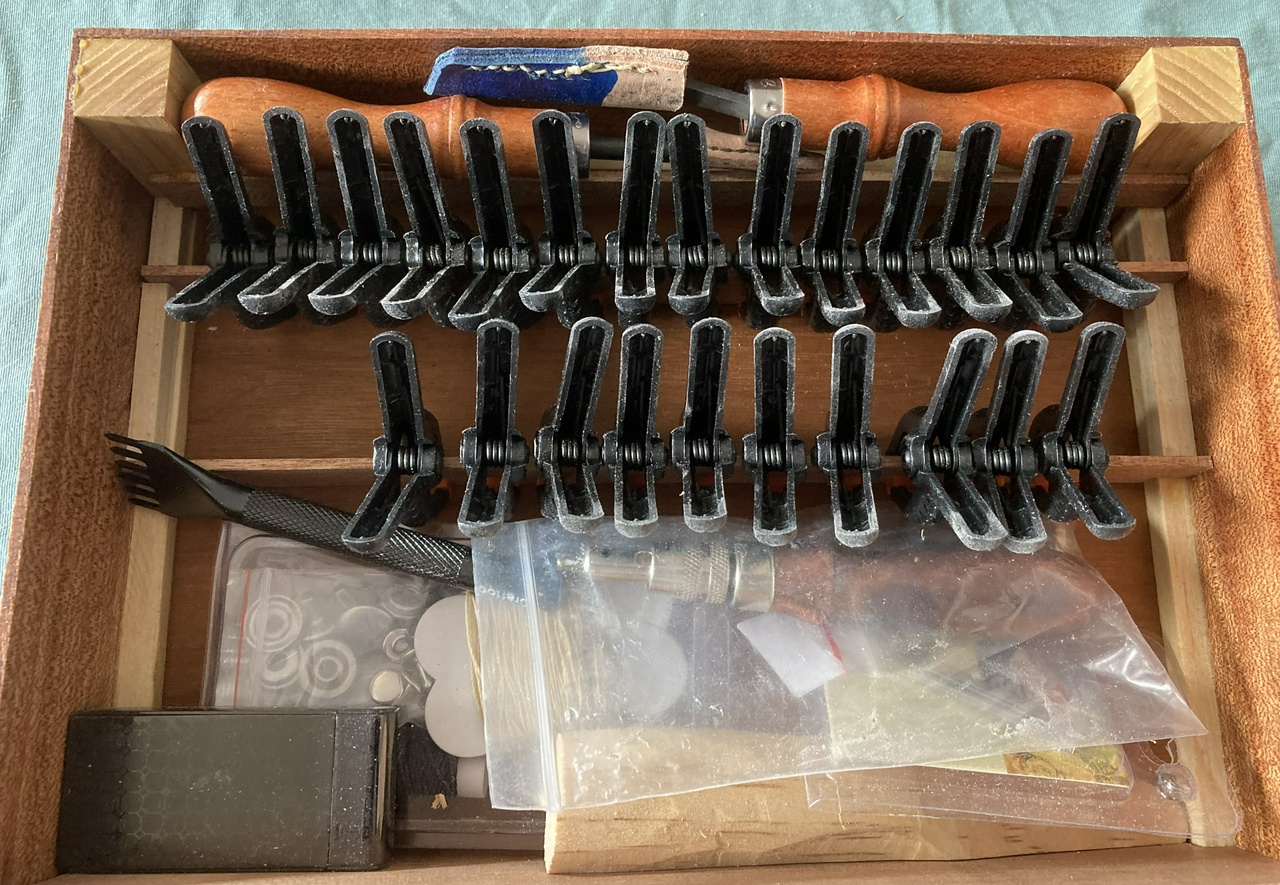 I made a carving knife for myself recently. The handle is apple from a tree growing in my front yard in Minneapolis, with red Micarta, ash, and a brass pin to hold everything together. 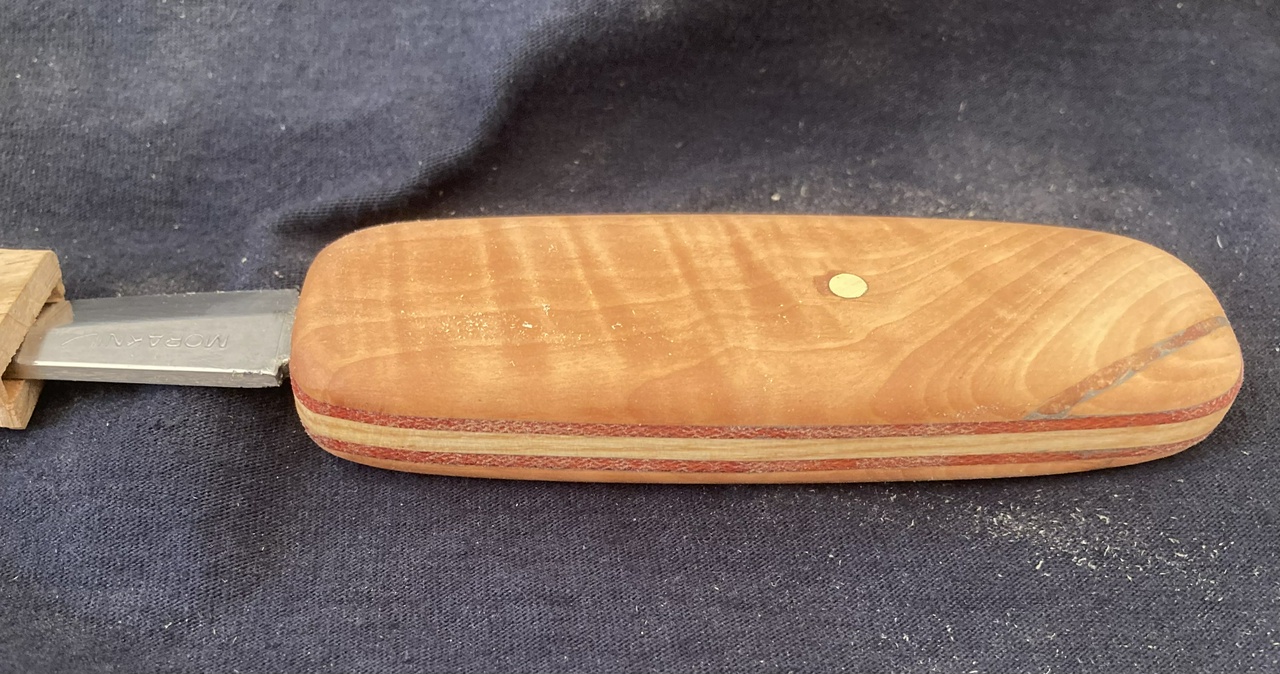 The blade is a Morakniv 120 LC laminated carbon steel blade with the tang running full length through the handle. 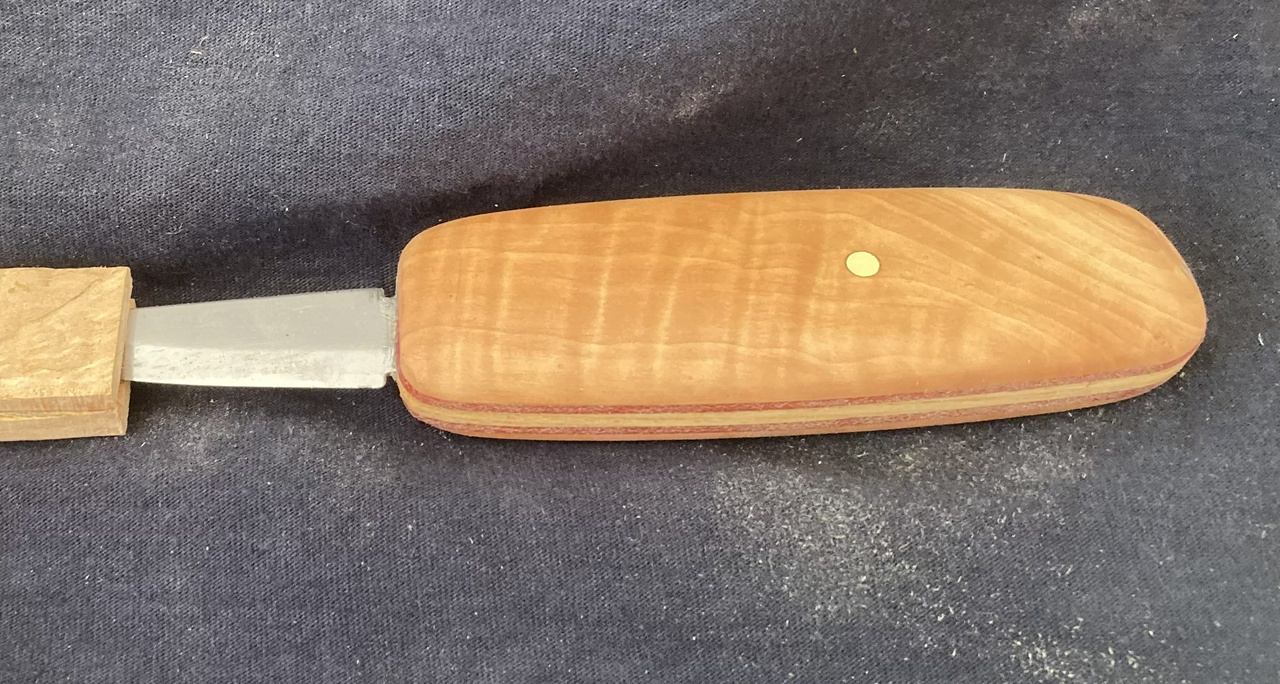 The ash veneer matches the thickness of the tang, which makes construction easier. The pieces of apple I had were thin enough that I though some extra thickness from the Micarta would feel good and would also offer some contrast. 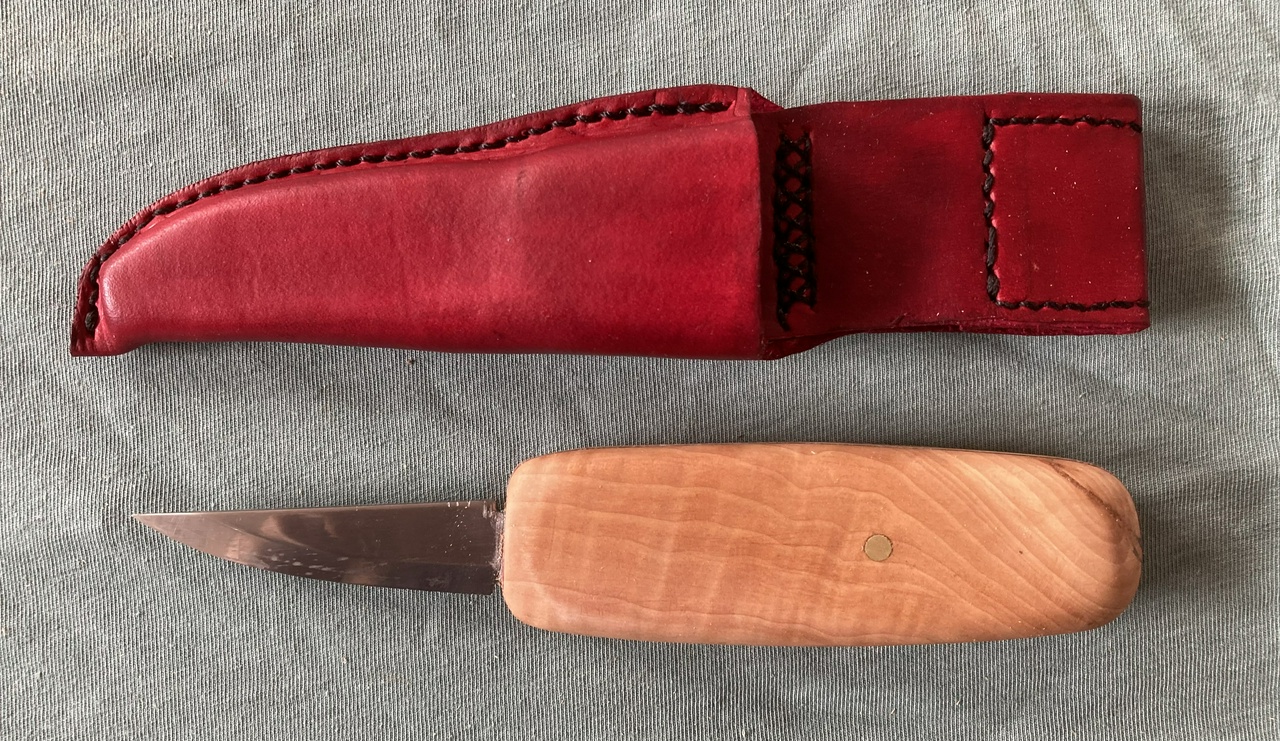 Once I had chosen red Micarta, I decided the sheath needed to match, so I ordered some red dye. The sheath is constructed in the traditional Scandinavian manner taught to me by my friend MaFe, with a wooden insert cemented into the leather to protect the leather from being cut if you insert the blade carelessly. 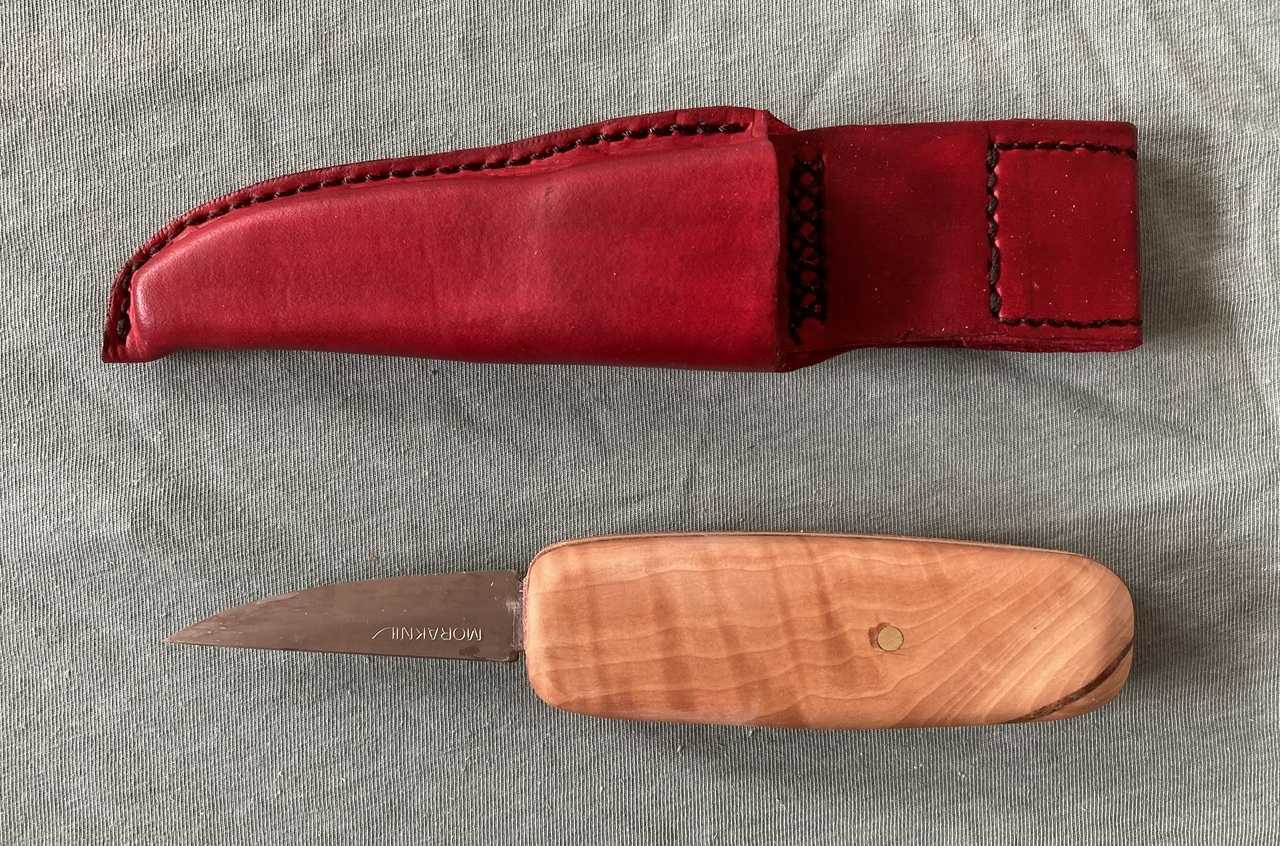 I’m happy with the knife and it will probably become my primary carving knife for a while. 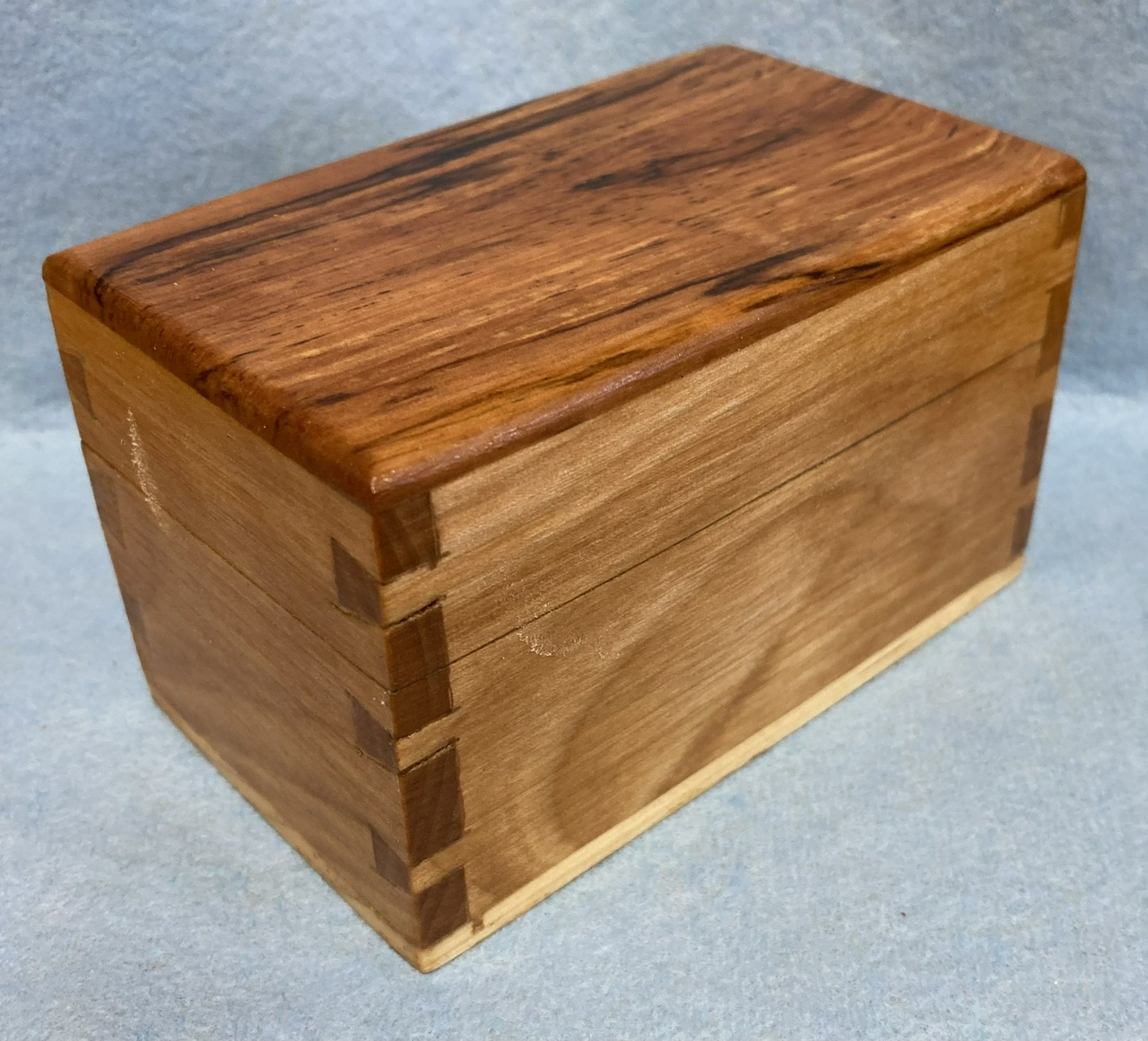 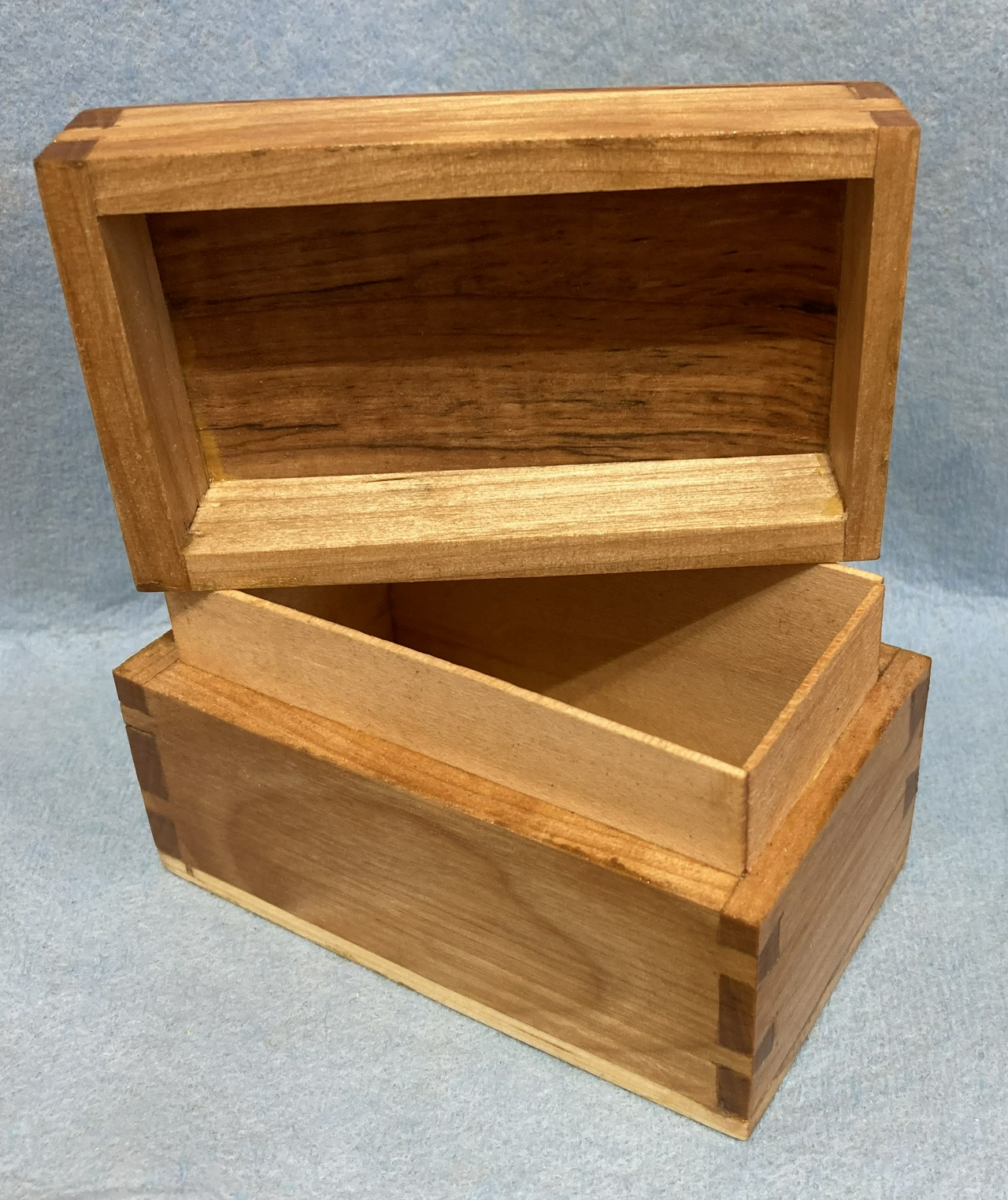 I made the box to use up some small scraps, and to practice “working small.” The size was determined by the size of the scraps and “by eye” as I fine-tuned the dimensions. 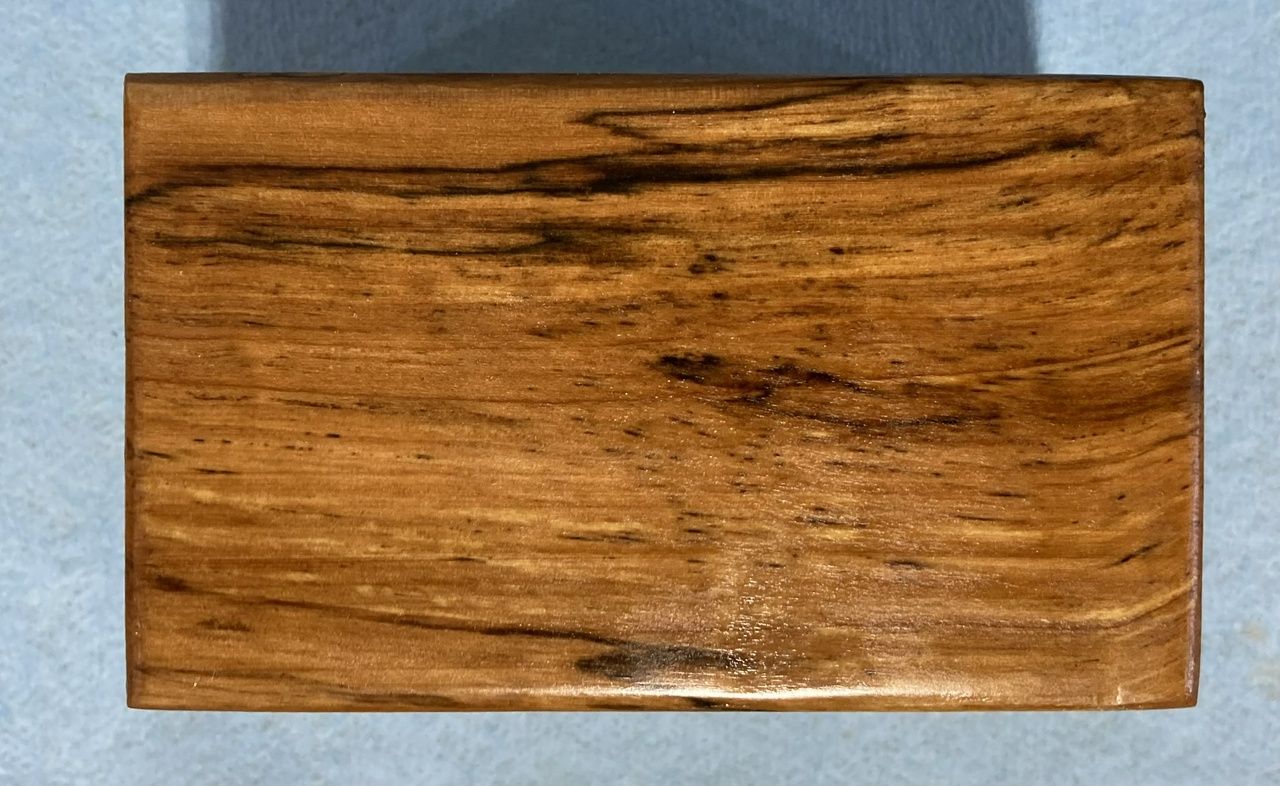 The sides of the box are quarter-inch (6mm) birch, dovetailed together. The bottom is ⅜ inch (9mm) pine, rabbetted into the sides (to reduce the apparent thickness), and the top is a ⅛ inch thick piece of apple from a crab-apple tree that grew in my yard in Minneapolis. 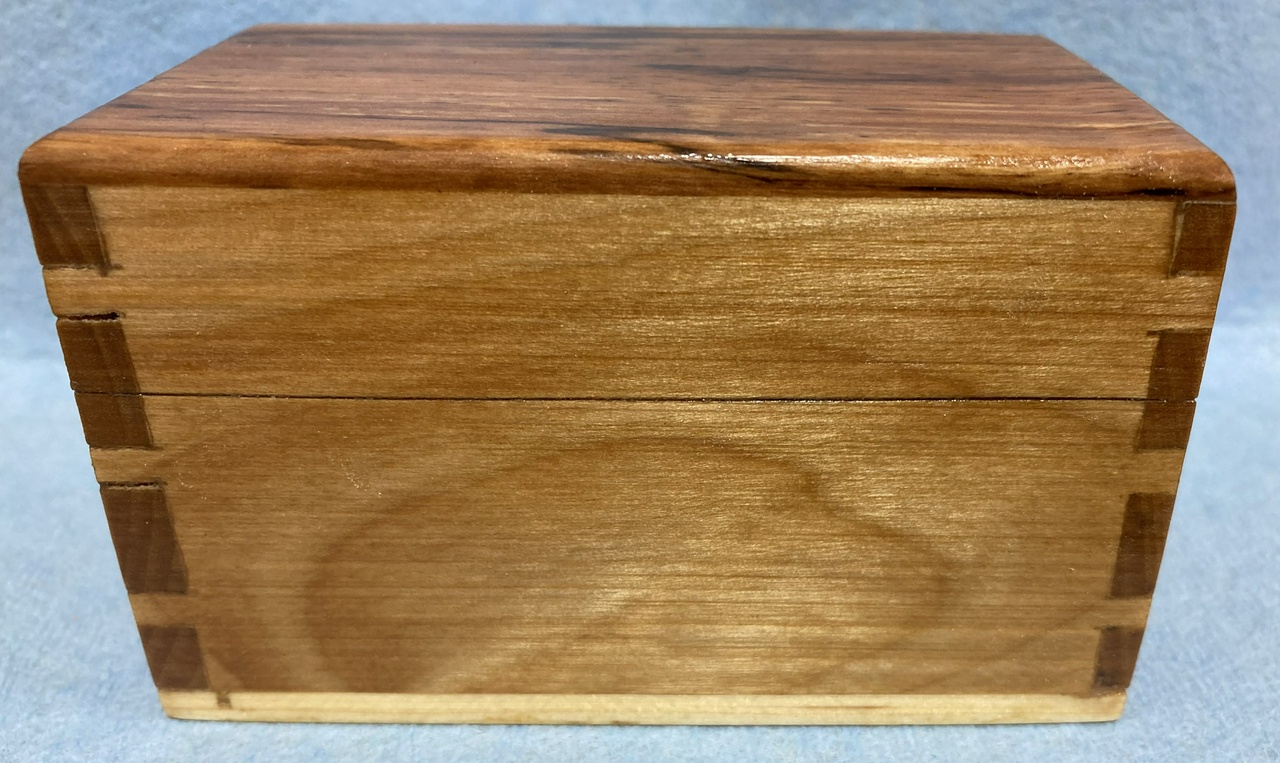 The insert is 1/16 inch maple veneer, simply cut to size and glued to the insides of the sides so the top slides onto the insert. 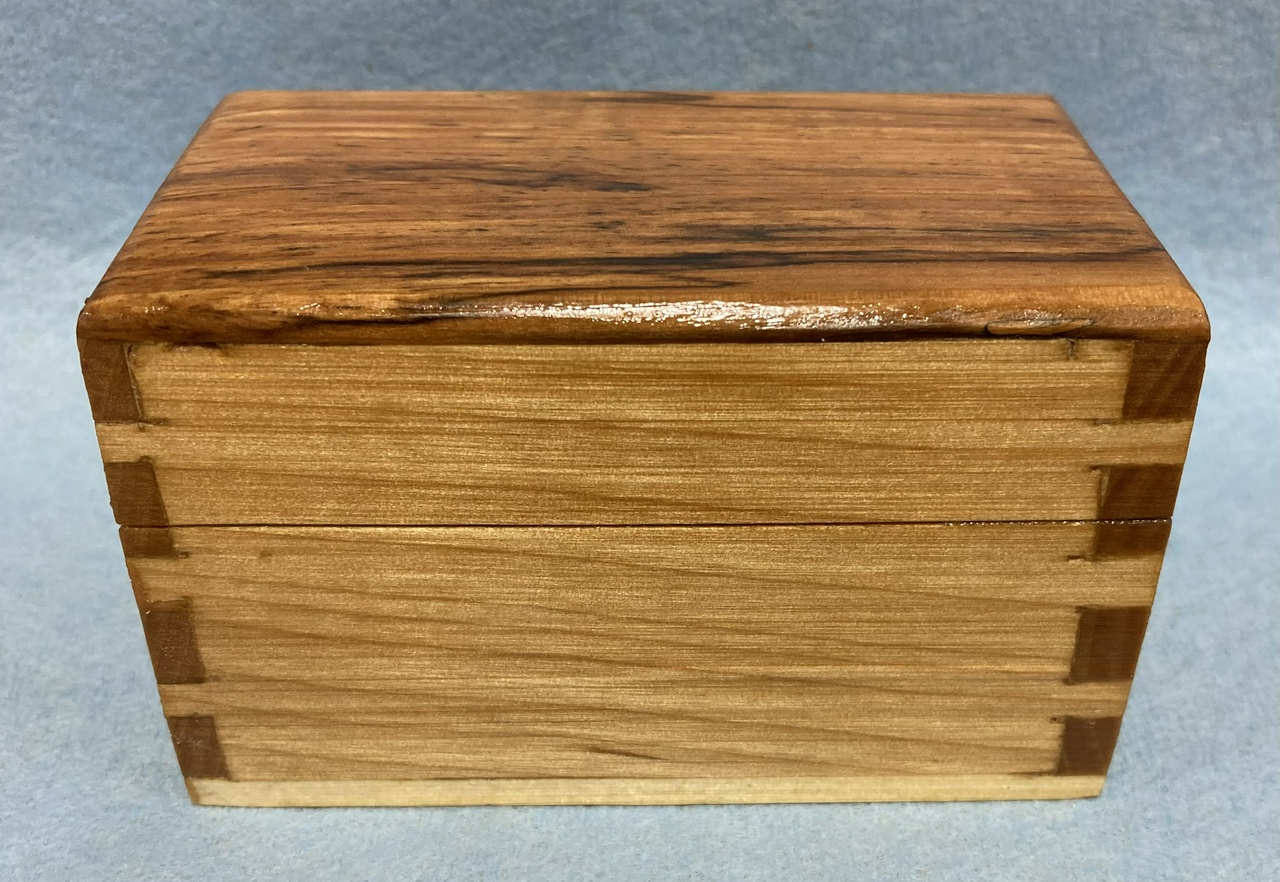 I love the way the top turned out, and am glad I didn’t just throw away that small scrap. 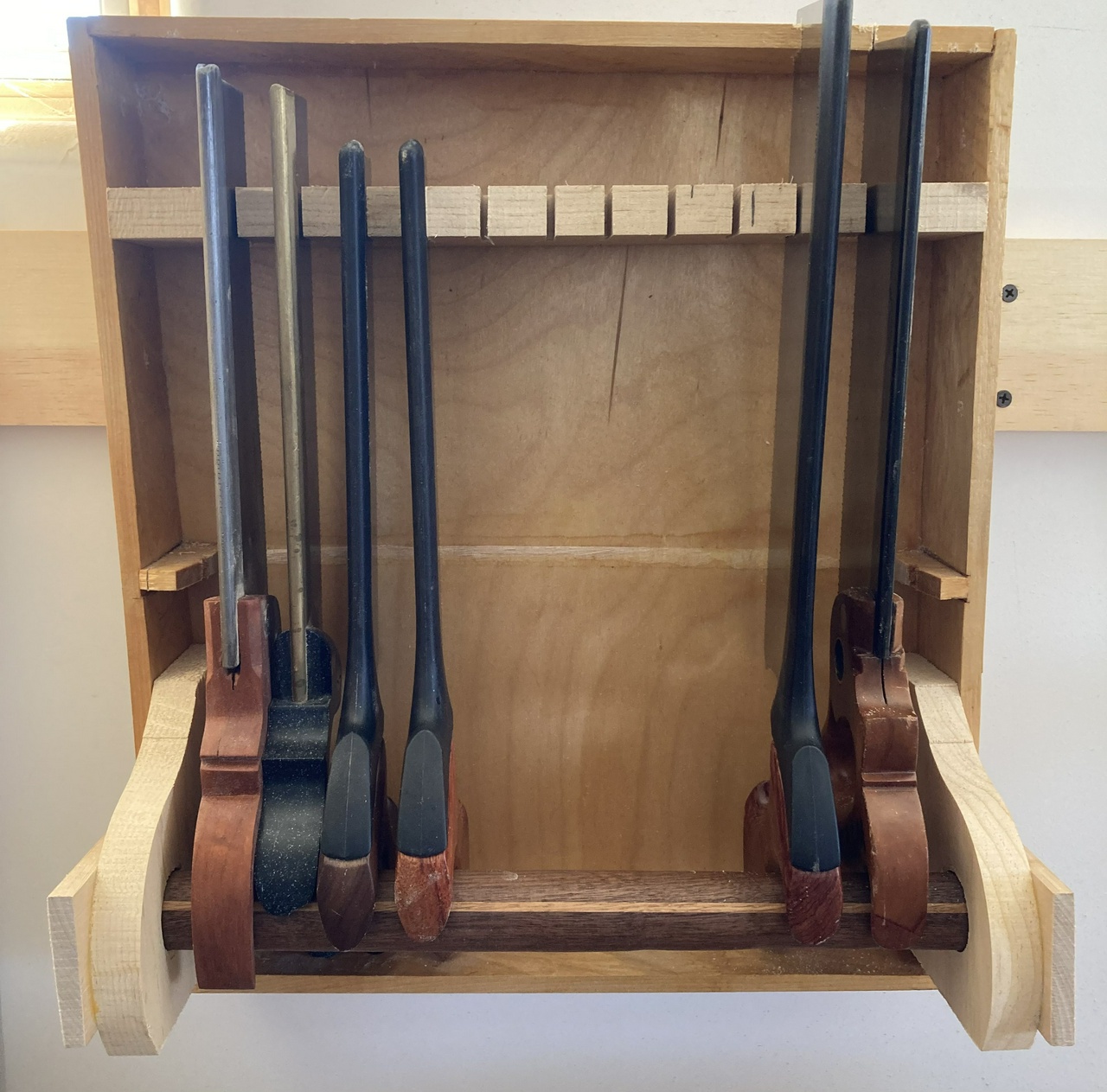 Been organizing my shop, and I no longer needed my old chisel till so I knocked out the existing rack within it, added a bar at the bottom and a board at the top, et voilá. 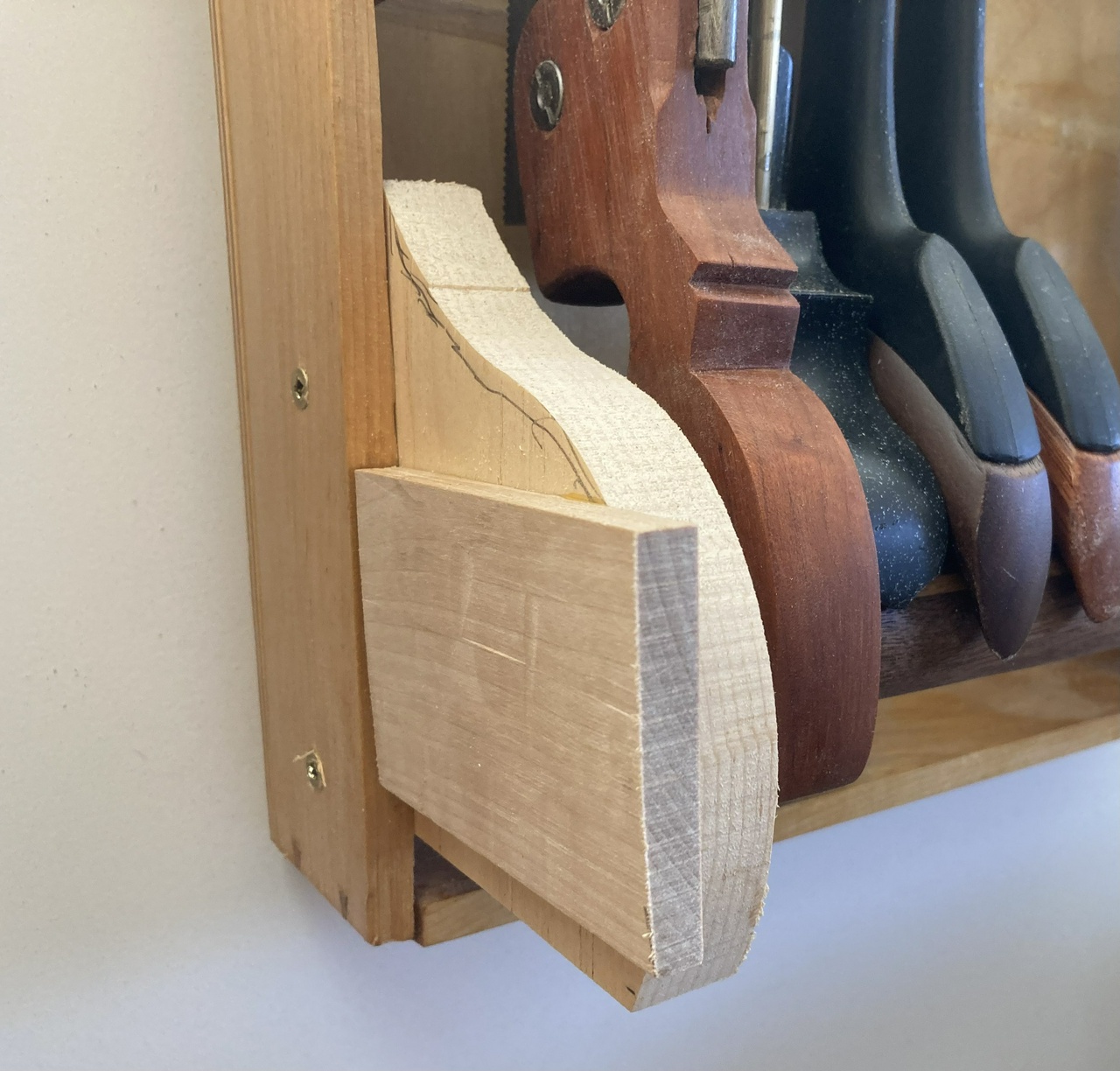 Some day I’ll clean up those square corners and get a coat of oil on the new parts, but for now, my dovetail saws are off the bench.